The total solar eclipse of August 21, 2017 was a pretty big media event, and not too shabby as far as astronomical events, falling somewhere on the spectrum between uncommon and rare, at least from a personal, ability-to-witness scale. And this was definitely my first.

But realistically, I wasn't holding any illusions. It promised to be the most photographed solar eclipse in world history, cutting right across the entire contiguous US at a time when the vast majority of the population had a camera at hand, as well as unparalleled information access. The goal of most photographers and artists is to do something different, rare, even unique; this certainly wasn't going to qualify unless I could pull off something really special, and I had no intention of trying. 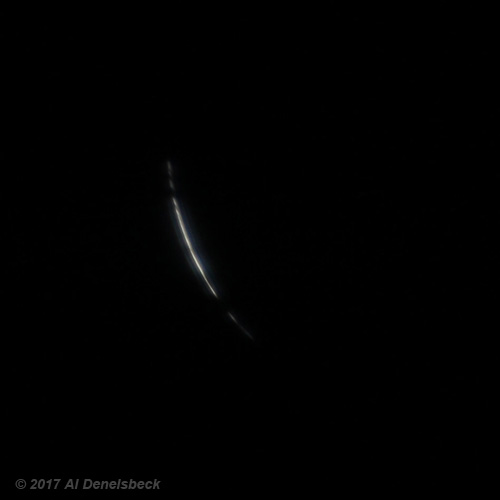 Nonetheless, I did decide to pursue it, because I could get within the path with a day trip, and I'm glad I had the experience. The whole story can be found on the blog, including several other images from the trip and other contributors. Here, I'll simply say that the photo at top is unfiltered and unaltered; you really can see the corona by naked-eye, and even a hint of the pinkish solar prominences on the lower right side. At left, however, is the version with a homemade solar filter, essentially two layers of aluminized mylar film sandwiched into a UV filter – not optically ideal, but considerably cheaper than a filter that I would have had about an hour of use for, at least until the next total solar eclipse. What you're seeing is the last fraction of a second before the sun was completely blocked, what would have been the "diamond ring" had I not been using a filter. And I realized too late that I should have left the filter off for an exposure or two as the sun re-emerged from behind the moon, just to capture that brilliant starburst effect.

We found a spot near the head of Lake Rabun in northern Georgia (the US state, not the European country) which turned out to be pretty nice. The sun was way too high to even attempt framing it with anything except tree limbs, and not worth the effort. Think about it: when the sun is bright, it's too bright to see any detail on it as well as anything else in the foreground – the exposure levels are radically different, way out of the range of being captured in any photo. And granted, the sun is a lot dimmer during an eclipse – and so is everything else, by almost the exact same amount (there is a very small contribution of light scattered from regions outside of the shadow itself, but it doesn't amount to much at all.) So, framing the eclipse with anything at all would have been supremely challenging, and wasn't part of my plans

Yet still pretty cool to see. And there remains a good chance that I'll try again for the next one in 2024.