Every once in a while I run across a short series of images in my Miscellaneous folder that make me pause, or at least they did. I’ve mentioned at least once before that I’m a helicopter enthusiast, actually falling just shy of ‘fanatic’ – I can usually identify the common models in the area at a glance, and can even tell a few just by sound. So spotting this one passing way overhead a few years back, I fired off several frames for a closer examination when I got home. And that was where it all started. Before I go any farther, I’d just like to point out that this is a tight crop, about half of full resolution, from the original frame, itself taken with the 80mm macro so representing a slight telephoto view, maybe about 2x magnification; by naked eye it was pretty small. This is the full frame. So it wasn’t until I unloaded the memory card at home that I got the best look at it, which started the mystery that lasted nearly five years. Because I did not recognize the model seen here. Moreover, trying to find it proved to be more than a little difficult. Most helicopter photos are from the side, profile, so some of the details that will be seen from underneath are not readily visible. What was throwing me off was the tailplane, which appears right at the very end of the tail boom (rare in itself) and those large appendages to either side of the body, which are not landing skids. The other details that I was trying to match up were the four-bladed main rotor and the very abrupt end to the main fuselage, with a narrow tail boom.

I’m embarrassed to think that it took this long, and any of the more knowledgeable helicopter people out there might be shaking their heads, but there was one particular detail that stuck in my mind, up until I got a closer look at the top-down view. Very few helicopters of any kind have large appendages like that out to the side, including a fully-armed military model – having something out that far is a weight-and-balance issue, so most times armaments are kept close to the fuselage. There’s one notable exception, and that’s the UH-60 ‘Blackhawk’ and its variants – long-range models may have sponsons with big external fuel tanks, but space inside the sponsons, between the tanks and fuselage, for arms as needed. I ruled this out quickly because the UH-60 has a very thick tail boom tapering back from the fuselage. 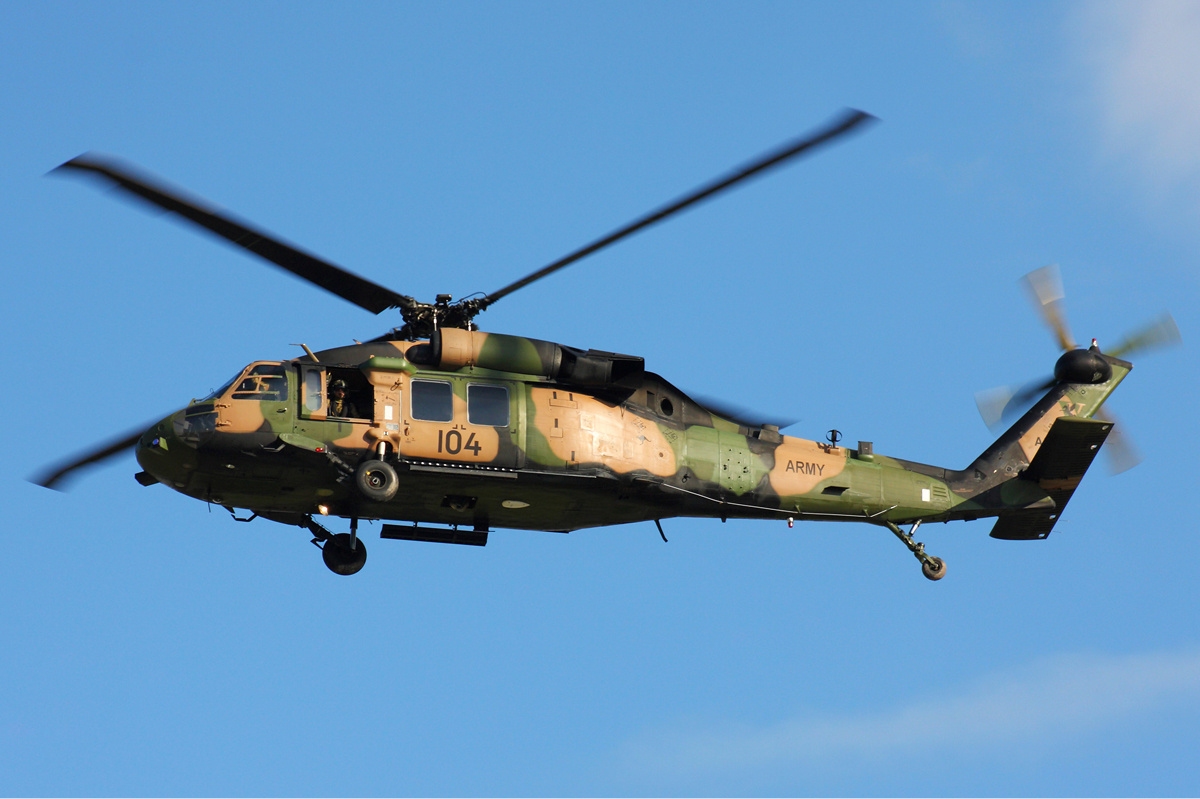 And so I searched through countless images, occasionally having a moment of inspiration before another image search dashed it – the tailplane was too far forward or noticeably swept, the main rotor had five or more blades, and so on. Seriously, I tackled this at least three separate times, including tonight.

Until, suspicious, I did another search on the UH-60, which I’m pretty damn familiar with. And discovered that the thick, tapering tail boom was as seen from the side – from underneath, it was much, much narrower, as little as a third the size in horizontal cross-section as vertical. And in fact, there are those damn sponsons and tanks.

The other thing that was getting me was mistaking the flare of the turbine exhaust treatments (heat suppressors, mostly) with the abrupt end of the fuselage, a blunt hindbody (a ha ha, “hind,” get it? Oh never mind) which usually spells a cargo door, such as the various medevac models used by the hospitals around here. In vertical silhouette like this, I was reminded of the BO-105, with some possibility of the BK-117 and EC-145 (all closely related,) but it wasn’t really the fuselage that I was looking at. Plus the tailplanes were either too far forward, too small, or swept a bit. And let me tell you, I looked at the MD-900 (no taper to tail boom and notable extension past tailplane,) and SA-330, AS-332, and AS-532 (all variants of same base model, with one-sided tailplane,) and so on and so on, immediately ruling out quite a few more from knowing that the number of rotor blades or the tail configuration were wrong. So it galls me a bit that I recognized certain details right off the damn bat but made a mistake over how the tail boom appeared.

Worse, I have an unbuilt model kit of that very helicopter sitting on a shelf just a few meters away – had I gotten around to building it, I might have had enough familiarity with that body shape. Ah well.