This is from 1995, though I’m not sure which month – I have nothing, no events or even photographic references, that I can connect to dependably, yet I’m going to say spring just for the hell of it. I was on my first unaccompanied tour of Florida, at this point on a beach on Captiva Island, and recognized the framing opportunity that I had with the great egret (Ardea alba) and the driftwood (Egisse lignum) – it was among the first images that I recall taking with the intention of making something fartsy and worth framing or display. It would have helped if I’d had better light conditions, or been using much better film, or even if I’d done the negative scan better – this is a very old scan (2002 I believe,) and while I undoubtedly have the negative in a binder behind me, I really don’t feel like redoing the scan for this post, since I know there’s only so far I could bring it up anyway. Nonetheless, it did display on my ‘beach’ wall for several years, even though I look at it now and go, “Yurgh…”

Now, here’s the thing: composition-wise, I’m not sure I would do something significantly different today, given the same tableau – I like the driftwood as a framing element and the depth-of-field is fine, so I probably would only shift position slightly to de-center the egret, and perhaps wait for different head positions or another bird to fly past in the background. Color-wise, I’d certainly be getting better results, even with the slide films that I’ve largely abandoned now, and I would most likely be out near sunset for visiting this gulf-coast beach, hopefully with far less overcast conditions. I was concentrating on photography for this trip, but not meticulously planning my timing as I tend to do now. Still, this was just casual poking around, so perhaps I’d still only grab frames as they presented themselves. 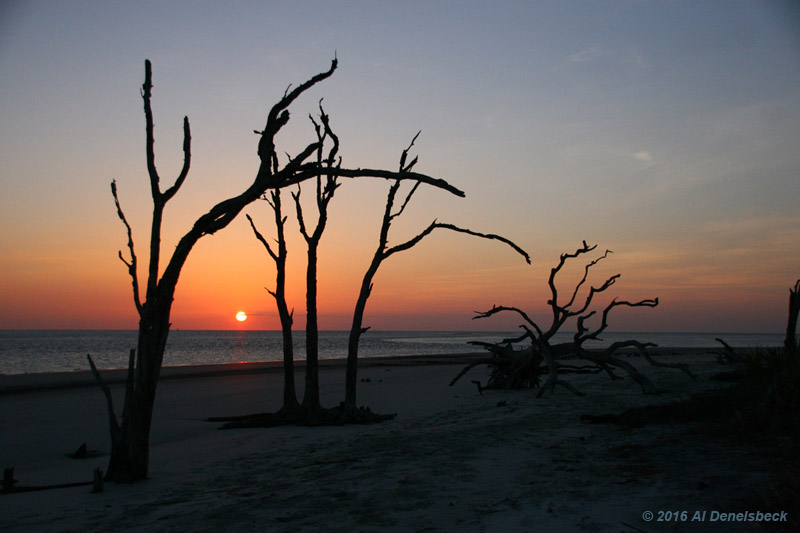 This is instead Jekyll Island, Georgia, and the image still displays on our walls, a large canvas up over the fireplace. I knew the scenic opportunities of this location, and set my alarm to get up way before sunrise to have time to hike down to this location and be there at first light, which is roughly 45 minutes before the sun actually breaks the horizon. No grab shot here – I ambled back and forth a bit to find the layout that I liked best with the three trees, and even though the sunrise didn’t do anything too elaborate, shooting wide at least captured the gentle gradients of the sky, while I recognized the emphasis of the tree limbs towards the right and used that accordingly. For a lot of other frames I chose that furthest tree to use in different ways, much closer to the camera. I do have to note that the tropical storm that blew through the following year toppled all of these trees and so this particular composition isn’t going to be duplicated.

The question remains: will I one day look at this frame and go, “Yurgh,” as well? My instinct is to think, No, it’s pretty strong as an image, I won’t ever be able to dismiss this readily, but at the same time, if I did progress that far artistically, I’d be pleased with myself. Only time will tell.

[I have to note that I went to three different online English-to-Latin translators to produce a Latin name from “drift wood” up there, and two said summa silvam while one said egisse lignum, which I liked better. A botanist might tell me that the real name is Juniperus communis mortid or something, but whatevs.]