… when the aliens landed.

I was out pretty late the other night, after a day of rain and drizzle, and the humidity and temperature made it just this side of fog. I drove past a scene and thought, I really need to come back and capture this, and so on returning home, I snagged the camera bag and tripod and went back out again. It helped that this was about a kilometer from the house. 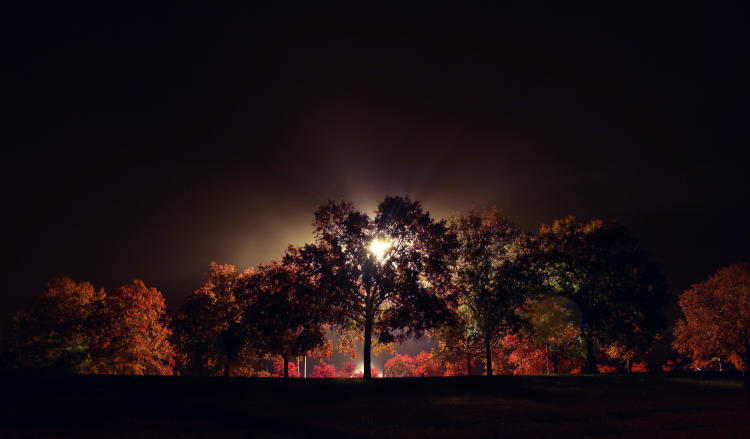 It was the mist in the air that made it work, but the fall colors helped a little. The original had a distinct greenish cast to it, so this version has been tweaked more neutral.

Almost as soon as I’d set the tripod up, right after I’d gotten the exposure levels in the right range, it started raining again and appeared to be in earnest, so I had to pack it all up – literally, ninety seconds of shooting time. Ah well.

No, it’s only some wastefully bright parking-lot lights up there, dog only knows why they’d be needed – you can see that I hid another down low behind the trunk of the central tree. Given more time to prepare and an assistant, I could have had some fun with creepy silhouettes in there, especially since this was only hours after Halloween, but not this time around. Maybe later on.

Things may go a little quiet around here shortly, as I get up to my ass in a new project, but there remain many frames that wait to be posted, so I’ll try to stay on top of them. Just you wait.