As indicated a couple of days ago, I went out very early Tuesday morning to catch the total lunar eclipse, the second for 2022, and just less than six months apart to boot.The next total lunar eclipse won’t be until March 2025, because whoever schedules these things is wobbly, but there will be a partial lunar not quite a year from now (for this area, anyway,) and a total solar eclipse in April of 2024. That won’t be quite here, but neither was the last, and I have friends in the totality band so I intend to be visiting them when that one occurs. But let’s not get ahead of ourselves. 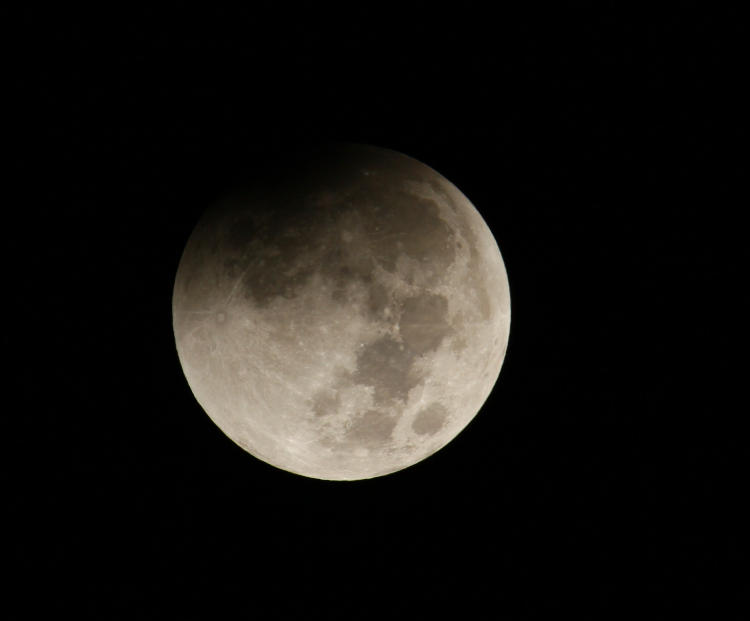 Because of the early hour of the morning when this was going to occur, and the fact that The Girlfriend and I were scheduled to leave on a trip a little later on that day, and the fact that I already have lots of photos of a lunar eclipse starting, I didn’t arrange to get to my viewing spot until just after the umbral phase began, which is the bit where an eclipse is obvious. I used this time to shoot numerous frames on manual focus and examine them closely in the LCD preview at high magnification, to know that I had focus sharp; when it comes to lunar details, autofocus (or at least my own) isn’t precise enough to trust, so I fuss with it until it’s as sharp as I can arrange. 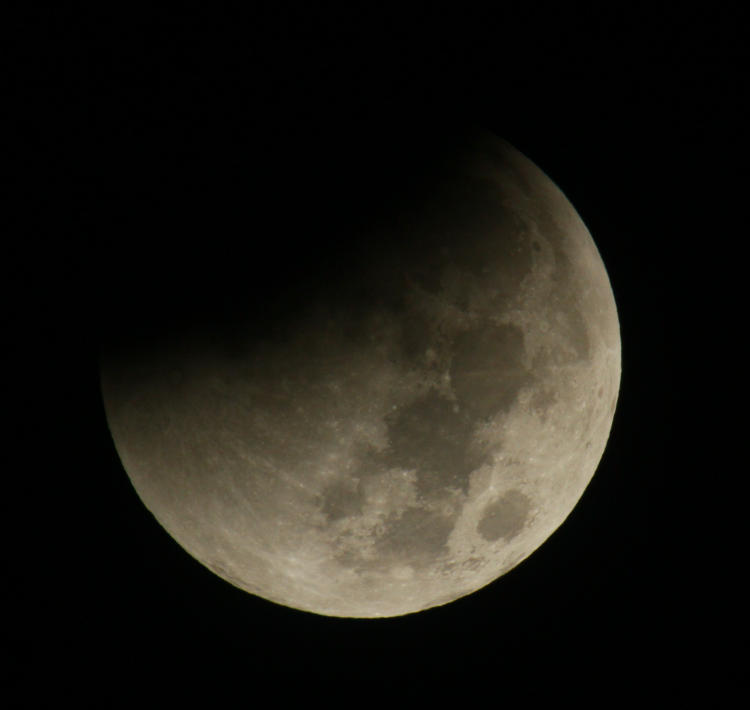 A short ways in, I switched to using the 2x teleconverter, which with the Tamron 150-600 provides somewhere around 1000mm focal length. But the teleconverter has a faint color cast to it, not noticeable in most circumstances but visible in moon shots back-to-back. It would be easy enough to correct, and not even worth the bother – I could assume that the moon should be neutral grey and still be dead wrong, due to atmospheric filtering. 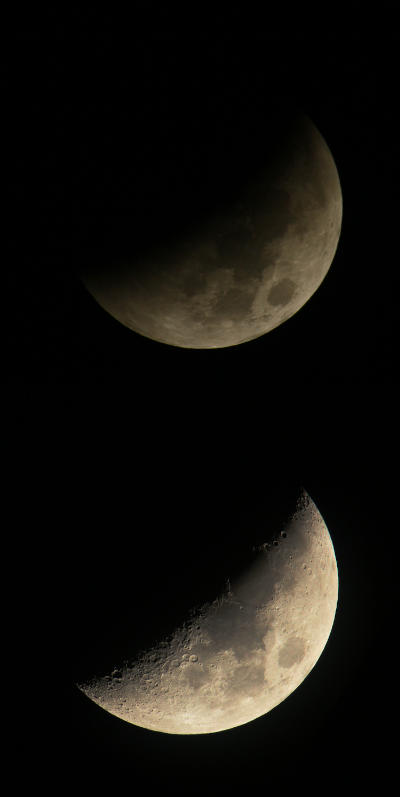 Now we have a pair of comparison frames, of the eclipse on top and a similarly-shaped crescent phase on the bottom. If you know moon phases, there’s really only one small bracket of time during an eclipse when it might be mistaken for a normal moon phase, because the Earth’s shadow isn’t shaped properly to match the shadowed moon except for one period of time – granted, this lasts for a few minutes so it doesn’t require exquisite timing. But these two frames show that they really can’t be mistaken for one another if you’re familiar with the moon, because the shadows of lunar geography thrown by the oblique sun angle in normal moon phases aren’t present at all during an eclipse. It also shows why full moon shots are far more boring that partial phases, when the details really stand out, even as small as I’m showing here.

Then there’s also the trait that moon phases have a really distinct terminator, the shadow line, while eclipses show much more of a gradient, and during this period you can see the effect of the penumbral shadow better, though it helps to have something to compare it against like this. For trivia’s sake, I’ll point out that the moon rarely passes directly through the middle of the Earth’s shadow, so the ‘phase’ mimicked by the eclipse is cocked out of line with the true lunar phase, but the moon also wobbles a bit so the true phases also wander, being aligned perfectly with the poles only two days out of every 28 – the match here is damn close and merely coincidental, though you can see the difference if you compare the mares carefully.

A little better than halfway to totality, I did an experimental frame: 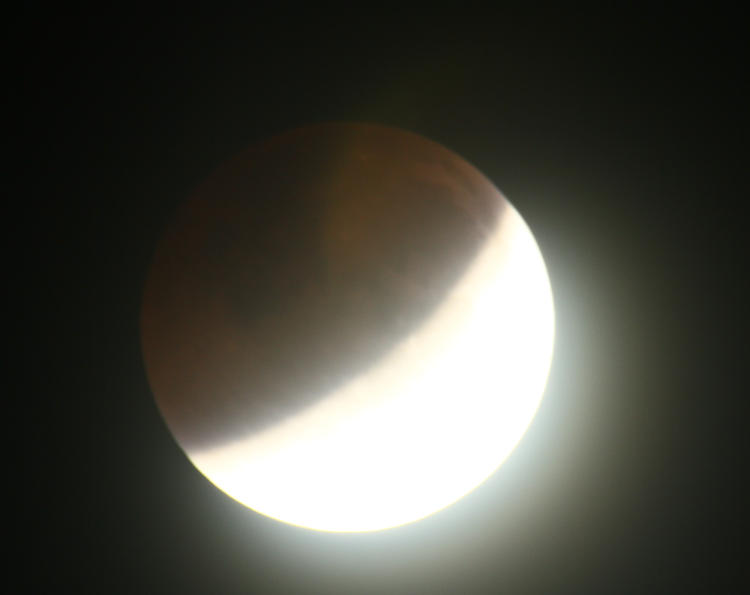 All during the advancement towards totality, there is still light from Earth reaching the shadowed side of the moon, and this becomes more noticeable as the eclipse progresses, though it’s a lot harder to photograph, and this demonstrates why. I changed exposure drastically to bring this out, but it was still too early to be doing this: the light from the uneclipsed portion blew out the exposure and caused glare and ghosts. Trying again a mere fifteen minutes later produced better results: 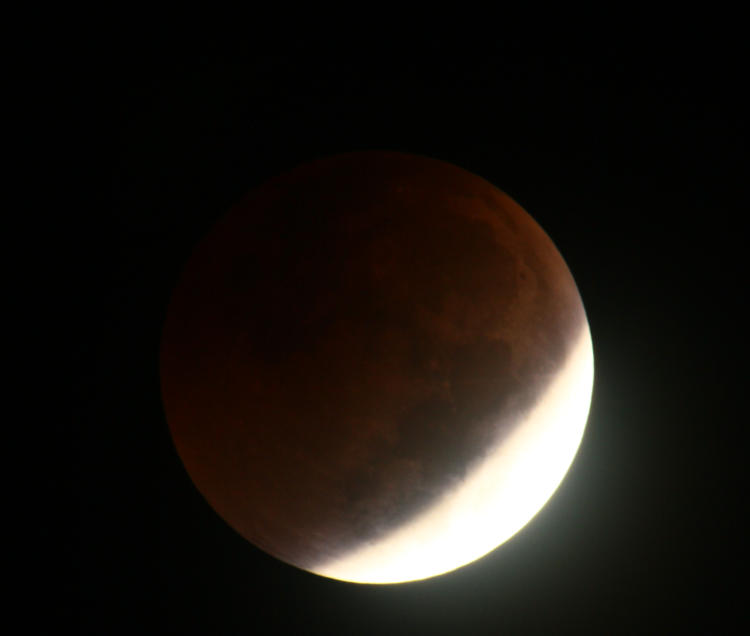 For the record, this is about 12 minutes before astronomical totality, though when you’re photographing at higher magnification, this distinction becomes noticeably arbitrary. 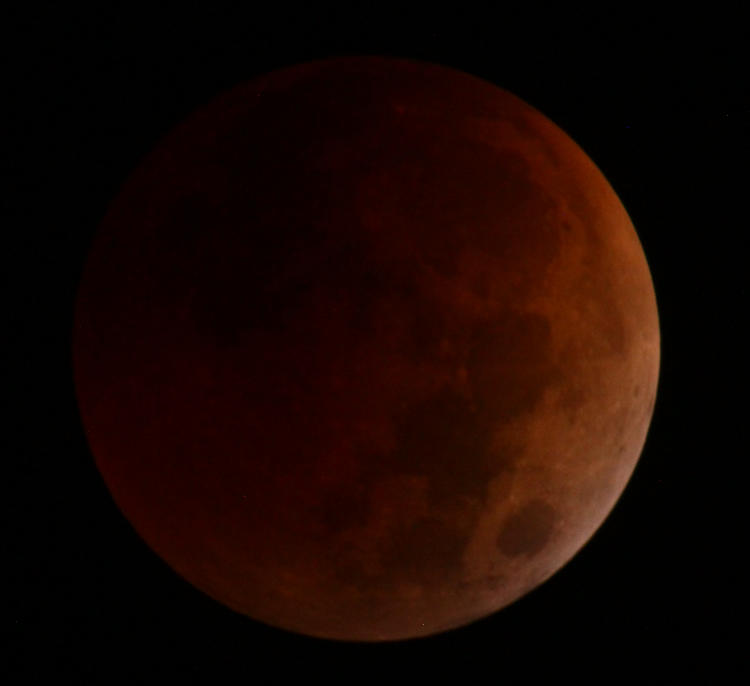 This is about four minutes past reaching totality, and there remains an edge that shows more white light than red; the image from two days ago is right when ‘totality’ occurred, and you likely wouldn’t consider that one quite there yet. I’m comfortable that my timing is correct because I’d just reset my watch for DST idiocy and so it was compared against UTC, though I forgot to set the camera until I was out there during the eclipse. 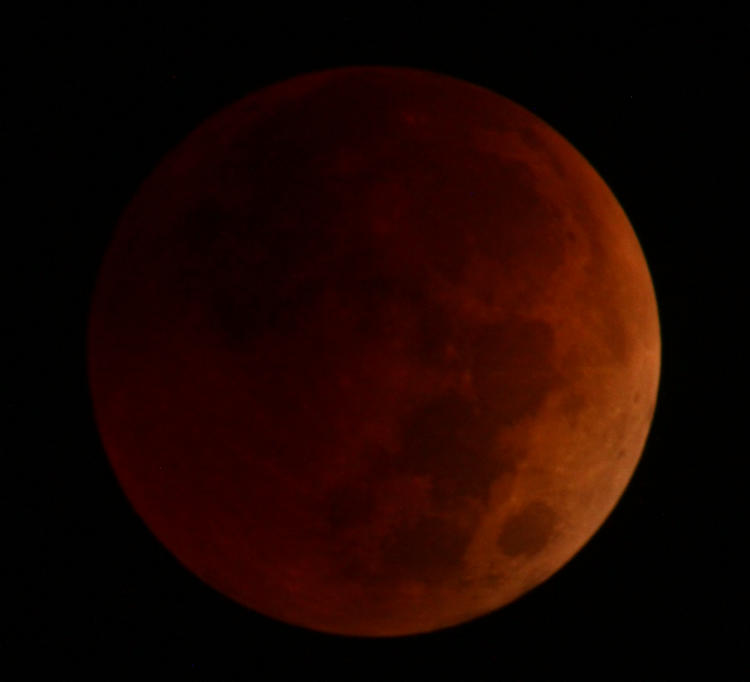 This is 11 minutes later, and it appears brighter only because I was tweaking exposure to see what I could get without motion blur from the moon moving (or the Earth, to be pedantic, or both, to be astronomical.) This exposure was 1 full second at f6.3, ISO 1600, about the limits both to avoid motion blur and to prevent noise from overwhelming the frame. Though it was with the teleconverter which loses two stops of light, so that’s more like f13. For comparison, the first image in this post was at 1/200 second, f11, ISO 200 – accounting for the teleconverter, this means the image above was letting in 10.33 stops more light than the first, or over 1,000 times as much light (it doubles every stop.) If this seems ridiculously high, know that doubling light isn’t as drastic as it sounds – this image is 66% brighter than the one immediately above it, shot at f8 instead of f6.3, which is 2/3 of a stop.

While the moon was going to set while still eclipsed, I didn’t stick around for this. I had toyed with the idea of placing it alongside some distinct landmark or something scenic in the foreground, but the low level in the sky was going to hamper this – it’s too easy to be obscured by trees and buildings, and few landmarks in the area are particularly tall, nor in dark-sky conditions. Not to mention that the size of the moon doesn’t compare well against virtually anything, unless you can shoot those from a great distance as well so the moon is larger in perspective. So as the moon dropped lower, I switched the tripod quite low and framed the moon among some foreground bare tree branches. 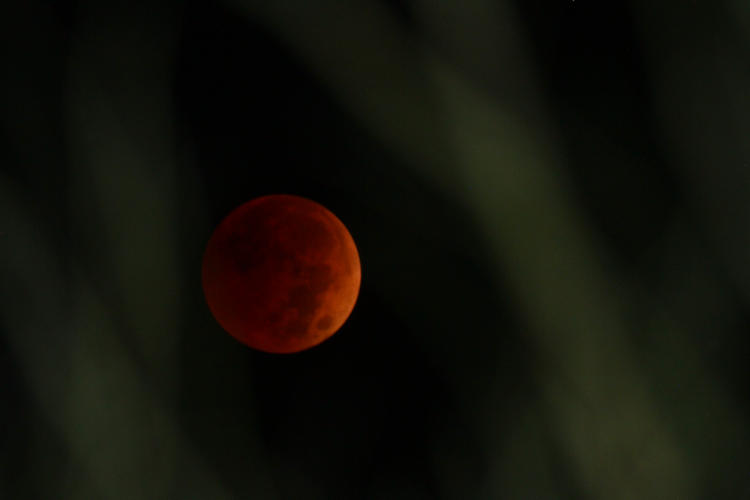 I used my pocket flashlight to illuminate the branches, which were way too close to even try to get into focus, and shifted a little to place the moon in the gaps, kinda. This was as fartsy as I got, because I still needed a couple more hours of sleep to get out on the road later on. But if you search around, I’m sure you’ll find other examples where people made the effort to be more creative.

And yes, I have a handful of photos from the recent trip, so they’re on the way.