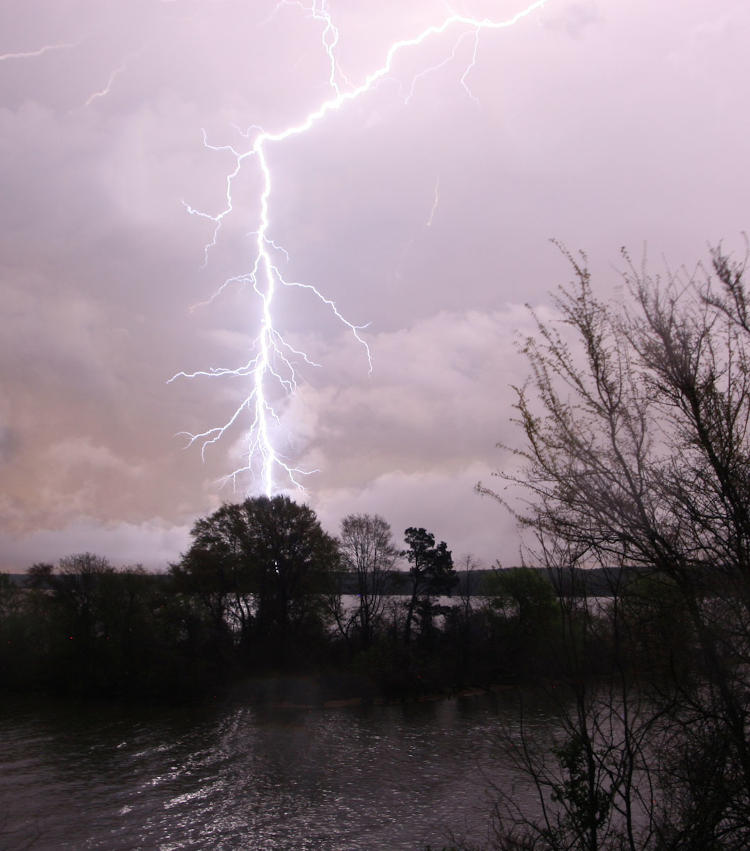 This one’s kind of missing the point, I’ll admit it – it’s not showing you what you can achieve at an exotic locale (like I’ve even been to one,) because this is the kind of thing that can be captured anywhere, and this particular frame came from not too far away from where I sit right now.

But, it does say something about preparedness, and the willingness to go to some effort in pursuit of an image. I was just about to go to bed when I heard the rumble of thunder, and referring to the Real-time Lightning Map told me the location and amount of activity. Jordan Lake is an area that I frequent when I need ‘big skies,’ low horizons and wide fields of view, not too far away, but even better, it was in position to take advantage of the storm. Screw sleep, I thought, I have a great opportunity.

The storm was petering out and vanishing in the distance when I captured this image, essentially from the back side of the storm. The lightning is not hitting that little island – it’s actually kilometers beyond it. But what a dramatic bolt!

It must also be said that I was shooting out the sliding side door of a minivan with the seats removed, mostly because it was more use to us as a cargo vehicle than a passenger car, but that was damn handy here. If you look close, you can see the isolated blurring that indicated this was not prevention against all rain, a drop or two managing to find the lens, but it was sure a damn sight safer when lightning was around. Too bad the minivan died not very long after this and was sold for salvage. We even defeat the original meaning of ‘tripod holes’ because I believe it was the only time that I shot anything out the side door of the van. This location, however, has been used a lot before, including the sunset/moonrise pics from a couple days ago, not a hundred meters up the road.

If you want to pursue these kind of images, the aforelinked Map service, or an app on your smutphone, can give you decent warnings as well as storm paths and activity. Having a few different locations nearby to choose from, with the foregrounds and settings of your choice, is good preparation – you’ll know that if a storm is passing just north, you can always use location A, while to the west would be location C. Knowing how to shoot lightning is useful, but most of all is remaining safe. Don’t take risks, don’t gamble on it not happening this time, and recognize that, even while the timing of strikes can often follow a rough pattern, lightning can be notoriously random, striking well ahead of or behind the ‘active’ part of the storm.

And, be prepared for disappointment. I’ve chased lightning pics for years and only have a handful of images to show for it; the majority of outings, even while improving my advantages as mentioned above, netted absolutely nothing. That’s the way it goes. If it were easy everyone would have great pics.