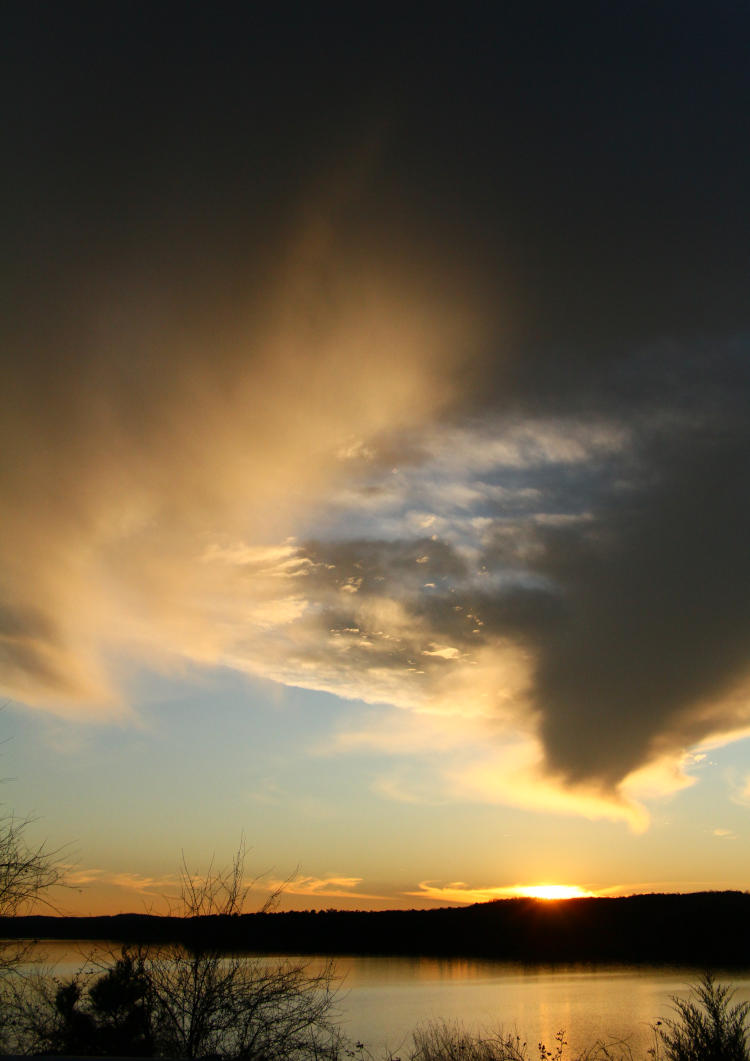 With the sky bright but showing some hazy clouds and the first full moon of the year about to rise, I decided that I needed an outing, and headed down to (of course) Jordan Lake. There’s a spot on the causeway where both moonrise and sunset can be seen easily, so the only switching that I’d have to do would be, at worst, sides of the road. But this largely applies only to the winter months when both celestial bodies are running south; in the summer months, they’ve shifted north and so one or the other is usually obscured from the vantage I’d chosen.

I got there a little late though, and as I was setting up the tripod the moon was already peeking over the trees. 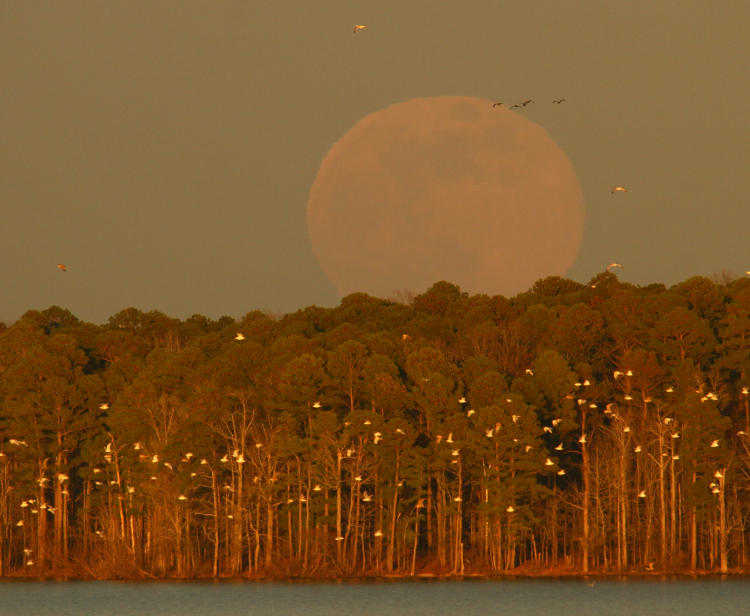 All of those white specks in the trees are birds, only they’re not in the trees but passing well in front, a huge flock of seagulls migrating to their roosting spots for the night. Just so you know, I checked Google Earth for that bearing and those trees were over 3 kilometers from me. The horizon was ostensibly clear, but the haziness and the color both speak of a lot of humidity, while the setting sun gave a yellow hue to everything else. Video would have been a useful thing here, had I been more on the ball.

More evidence of that was to be found. 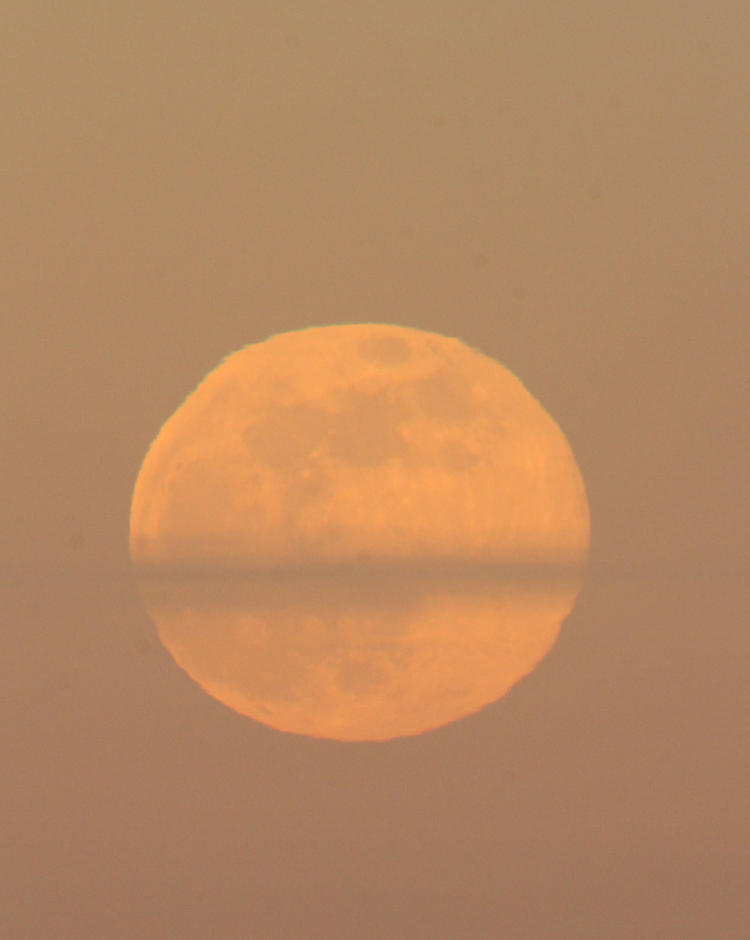 I could play around trying to achieve sharp focus all I wanted; it wouldn’t make a bit of difference here, with that much atmospheric distortion. Again, video might have shown some nice shimmering, but that’ll be another day. I suppose I could go out tomorrow morning for moon set… 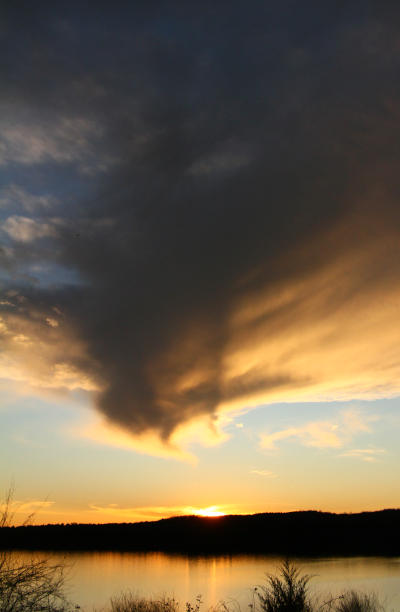 There was a curious effect that was visible while this was going on, though. As the sun dropped below the horizon it was of course illuminating the undersides of the clouds, and the vertical aspects of these could be discerned: some of the arms were dipping lower and throwing shadows across the clouds themselves. From our vantage these appear to be rising high into the sky, but this is dispelled by looking in the opposite direction, towards the moon. 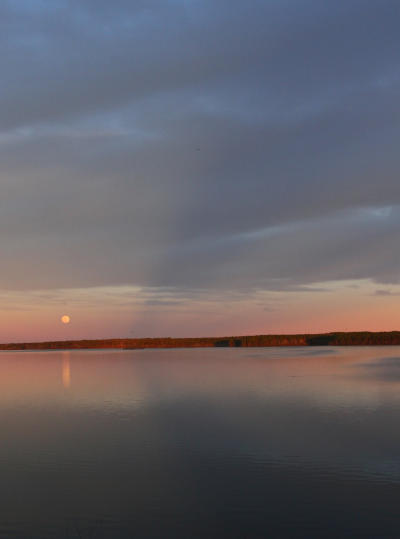 This was, in fact, when I first noticed them; you can see they cross the entire sky and disappear over the horizon, converging as they do – that’s one long shadow. And yes, that’s the moon, at 18mm focal length rather than roughly 1000 (and cropped tighter for the blog.)

Sun rays and/or the shadows created by them, the ones that converge down and ‘point’ towards the sun, are called crepuscular rays, while the ones that converge down on the opposite side, at the antisolar point, are called anticrepuscular rays. They’re all parallel, though, or as close to it as counts – it’s only our perspective underneath them that makes them seem to spread out or narrow down. While they’re directly overhead, they’re simply known as Sweet Baby Rays. But only right smack at the zenith. What this has to do with barbecue sauce I have no idea.

Meanwhile, the birds in the great distance remained very active. I would have liked the one below to be a bit sharper, but some of this was probably down to camera shake on the tripod, since I wasn’t shooting with a remote release and mirror lock-up: 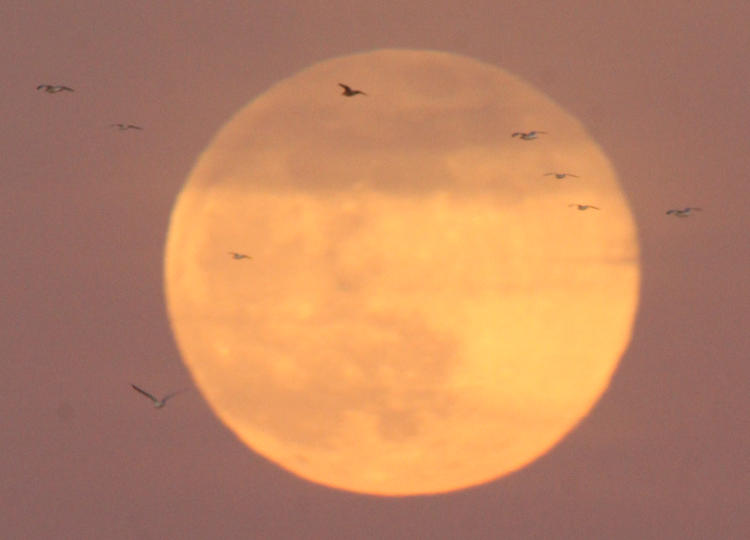 There was little warning that they’d pass in front of the moon. They weren’t even visible to the naked eye at that distance, and in the viewfinder there would be a bare second or less as they entered the frame. Hurriedly pressing the shutter to try and capture this did nothing whatsoever for stability of course. If I really wanted to capture birds (or planes or whatever) in front of the moon, I’d set up with the tripod and additional stabilizing arm (both of which I’d have to keep adjusting as the moon crosses the sky,) with the remote release and perhaps the LCD viewfinder for a larger image; this would have the added benefit that the mirror would already be locked up, so an automatic edge in stability. Maybe someday, but when it’s warmer. Granted, it wasn’t too bad out there tonight, temperature-wise, but it’s dropping again as I type this.

Eventually, the moon rose high enough that the near-ground distortion was thinned out and some detail could be achieved. 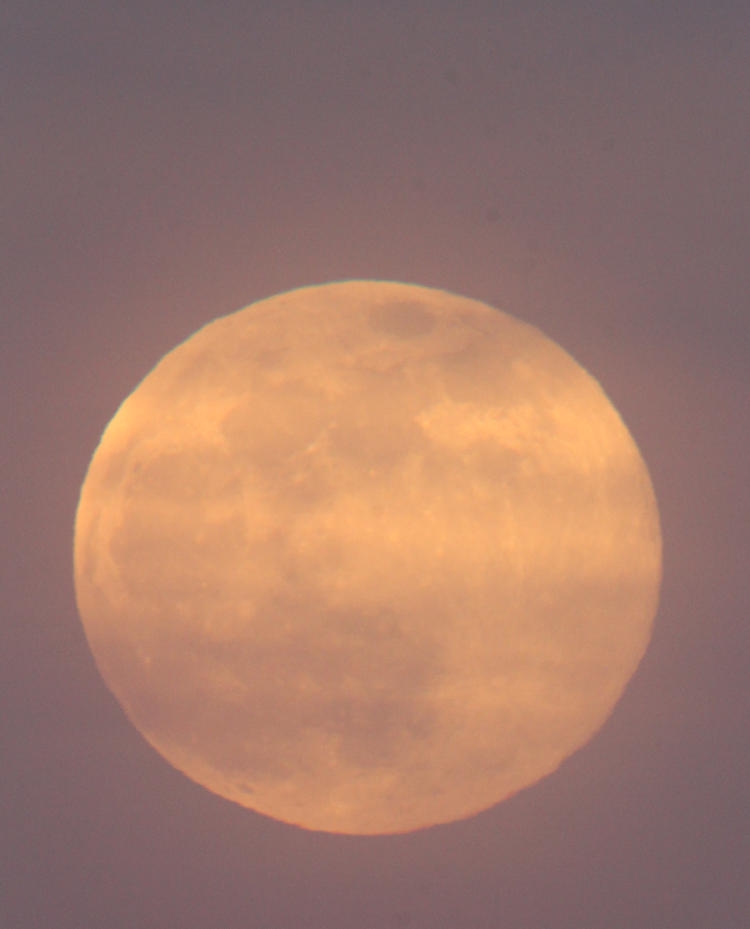 Granted, it’s still not as sharp as it could be, but there remains the twilight background and some moody thin clouds, so it was worth the trip. And the sunset, while not spectacular, nonetheless performed better than the vast majority of them in this area. 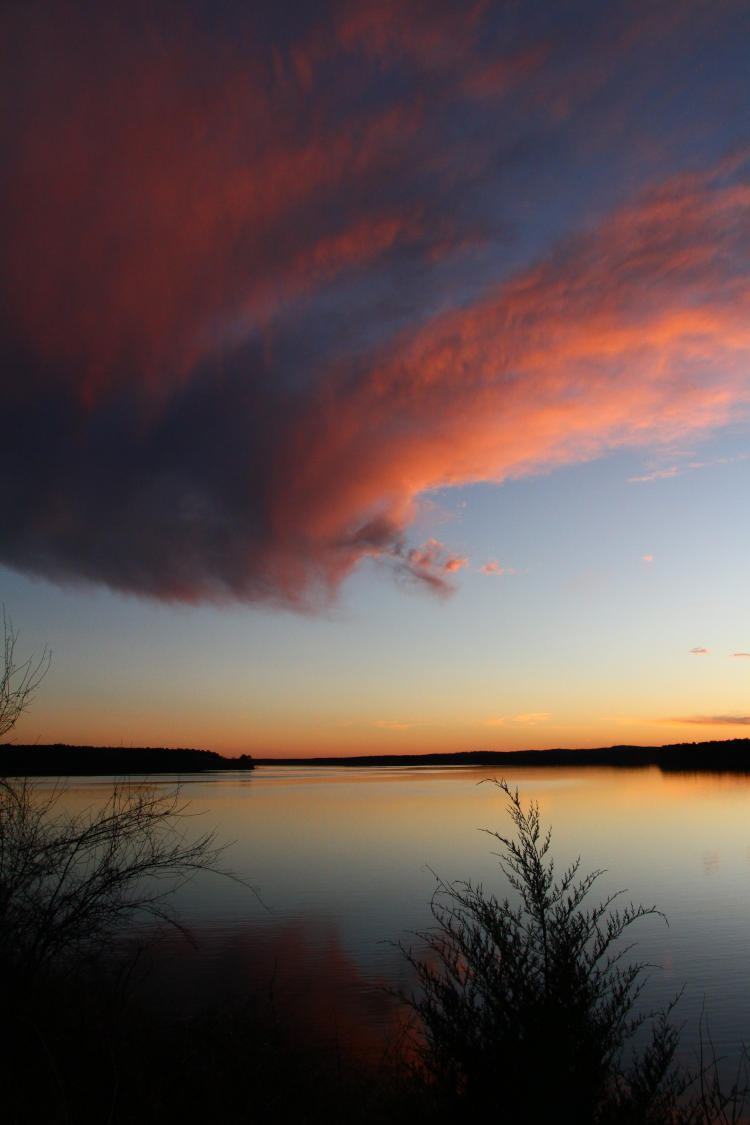 For once, sky conditions that I’d observed some time in advance remained in place while the sun set, without vanishing or alternately thickening up to the point where they obscured the sun entirely. I’m glad I made the trip this time.