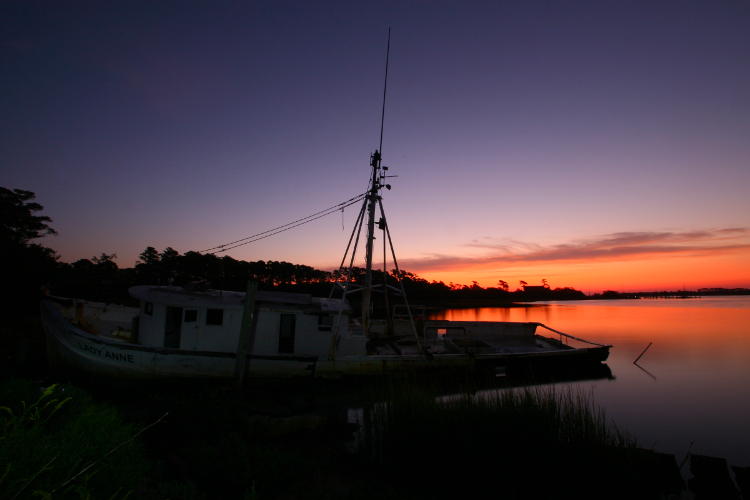 More cheating this week: You will no longer find this boat if you go to this location, at least not according to Google Earth/Google Maps, though where it’s gone I can’t say. Repaired? Dismantled? Driven off by a storm? Looming out of the fog just when our heroes were relaxing? Your guess is probably better, or at least more imaginative, then mine.

This was taken during our trip to Oak Island, NC, a semi-planned shot in that I spotted the boat the previous day from the causeway as we crossed the intracoastal waterway, and later on pulled up the maps to see if there was a way to get closer. It turned out to be trivially easy, since it was right off of a boatyard and we could practically drive right up to it, though my past experience with such locations urged us to park some ways back to minimize the chance of blowing a tire; the region was littered with scrap and debris. The sun wasn’t going to rise quite where I wanted it to, so I elected to use the predawn colors and augment with my pocket flashlight to keep the boat from being just a silhouette.

I’d been out the previous day on the beach for sunrise but the angles were wrong and the sun rose behind the buildings along the shore, so I was after something more scenic, without a lot of time to prepare or explore. This proved sufficient, though I’m always aiming to do something a lot more dramatic. Still, it serves as some color in the winter dead months, and who’s complaining about that?

« Out there [previous]
[next] No hesitation »