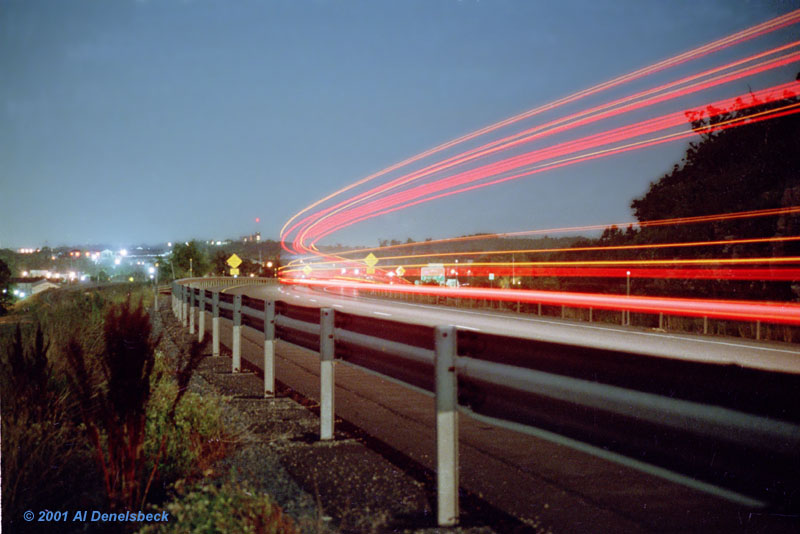 We’re going to go a little backwards on this one. We start off with a time exposure from August 17th, 1989, and despite it being on a negative with no date stamp, I can be this precise because it was taken following a total lunar eclipse, and I already knew the year and season. If I was really slick, I could give you a decent time too, because I know the precise location and the shadows from the moon will indicate where the moon was in the sky. I’m going to wing it, though, and say about 2 AM. The lights are from at least one big rig, but I think it was two, passing through the frame as the shutter was locked open, and despite the slight clutter from the other elements, the framing couldn’t have been much better.

But this image, an idle experiment while finishing off the roll, illustrated not only how cool time exposures could be, but how much light the full moon actually throws down, and that it’s not ‘blue’ as we imagine it. The original print received from the lab had been lightened more than this and appeared to be full daylight, but on examining the negative and ‘default’ exposures, I determined that it wasn’t quite that bright, and this is closer to the mark. It’s also the very first print that I had enlarged for display, and come the digital age, I made sure that it was scanned meticulously (actually, multiple times,) and archived – I’m not losing this one.

All this was with a borrowed SLR camera in the very early days of my photography – what I possessed then was my Wittnauer Challenger, a rangefinder with a fixed 50mm lens. But it was the start of a faint obsession with long exposures, moonlight, and light trails. So how has this progressed? Let’s take a look at perhaps my best version since then. Nicely surreal, but honestly, no match for the first – I’ve never even done something comparable, much less exceeded that accidental effort so long ago. I admittedly don’t try too often, because the conditions have to be right, and I know that happenstance and luck contributed a lot to the initial image up there. This time around it was March 2000, on the edge of I-295 outside Jacksonville, Florida, the return leg of a trip through the state dedicated to photography. I saw the full moon glowing orange low over the highway and quickly pulled to the side of the road, set up the tripod, and waited for another truck. The very odd set of bars in mid-frame comes from a string of lights attached to the back of the cab, visible only briefly before the advancing trailer blocked the view again, while the uppermost lights came from the back of the trailer, indicating that I closed the shutter before the truck had gotten too far down the road. The moon was of course too low to illuminate the landscape (not to mention facing directly into it,) but this time I used it as an element instead, and the exposure was notably shorter; I can’t even go on memory for either, but from what I know about exposure now, I’d say the latter one was no more than ten seconds while the former definitely exceeded thirty, possibly a full minute or so.

I would have expected to have surpassed the quality of the first sometime well before 32 years had passed, but it’s never happened yet, and I have indeed tried several times. Really, getting a good location is a little more challenging than you might imagine, and the right vehicles in the frame count for a lot. But it also serves as a reminder that, in unknown locations throughout my stock, I probably have the best photos that I’m ever going to get of any particular subject. That’s not a good way to look at things really, and I’m always aiming to improve, well, everything. When (if) I beat that image up top, you’ll definitely see it here.

« Segregation has its uses [previous]
[next] But how? Part 30: Responsibility »