So this one is cheating slightly, which you’ll understand in a moment.

Many years back, my first digital camera was the Canon Pro 90 IS, a more touristy model than serious, partially because that’s all that I was going to spend at the time, partially because I was still wedded to slide film. But after shooting quite a few images with it, I noticed something a little curious, and ran a couple of tests. The image below probably isn’t the one that sparked the curiosity – I honestly can’t remember which one did – but it illustrates the trait well enough. The dragonfly is a female widow skimmer (Libellula luctuosa,) but that’s not what clued me in – instead, it was much more subtle, but the kind of thing that you might recognize when evaluating images for their value. Notice how the foliage beneath the right wing is completely blown out, over-exposed into pure white? That’s actually a bit extreme, and not due to contrast or saturation settings within the camera. From time to time, I’d notice that sunlit leaves, almost to the exception of anything else, would get washed out in the images, and so I did a few experiments. My suspicion proved correct: the sensor itself was sensitive a little outside of the range of visible light into the infra-red spectrum, and so things that reflected a lot of infra-red were getting a little extra exposure. This particular photo even holds a more distinct clue, but really, I only noticed it when doing this post. The blue arrow is pointing out the shadow of the dragonfly’s wing, where the exposure has dropped back down into range and shows green now. The wing, being almost perfectly transparent, shouldn’t be enough to reduce the light transmitted through it that much – but it likely does reduce or block infra-red.

I used to spend a lot of time on photography newsgroups, which were a wealth of information, and so I knew that most digital sensors were capable of capturing what’s called near-infrared, up to perhaps 1000 nanometers (nm) or so – our eyesight stops somewhere around 700. And the sensors today are still sensitive into this range – they’re just blocked with an IR filter within the camera body itself, but the Pro 90 lacked that filter. We’ll compare this to an image taken several years later with the Canon Digital Rebel (300D.) Of course, I have no images back-to-back, so I had to find one in similar conditions, but this is largely the same, shooting into open shade with the camera meter registering enough to get the shadowed areas in detail, while still having bright sunlit areas in the frame. But now they’re not bleached out, neither the paler undersides of the leaves nor the seed pods from what I suspect are hibiscus, there in the foreground. Because the Digital Rebel has that crucial IR filter.

But the lack thereof allowed my to use the Pro 90 to capture infra-red images, with the use of specific IR filters – technically, these were IR-Pass filters, blocking nearly all visible light while allowing IR to pass through. With those, I could produce lots of different effects, in the right conditions. 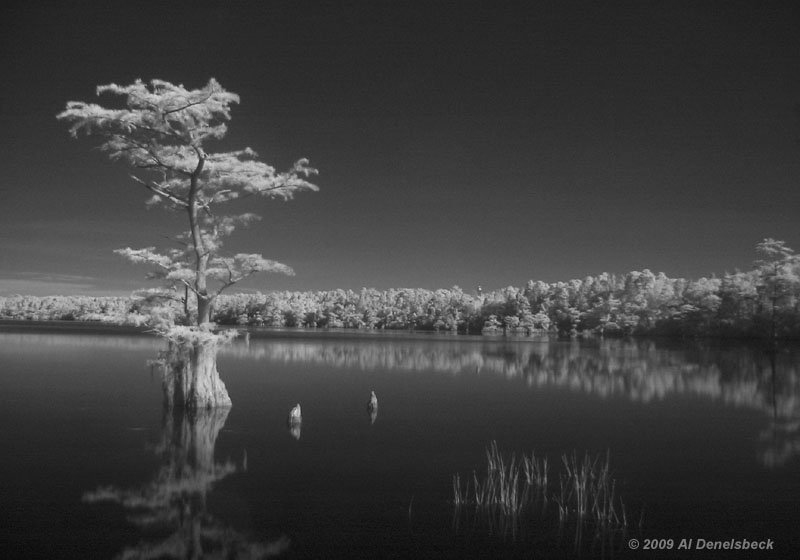 In fact, there are companies out there that will convert your digital SLR into a dedicated infra-red camera, by opening it up and removing the IR filter in front of the sensor – or you can do this yourself, if you feel comfortable/daring. Since there are numerous IR-Pass filters out there for different wavelengths, it’s better not to embed one within the camera, but just use it in front of the lens instead. And because the sensor picks it up just fine, the camera can still autofocus, though since IR is significantly weaker/less plentiful than visible light, the exposure times lengthen significantly and a tripod is always recommended. Of course, making such a change to your camera means it’s worthless for ‘normal’ images, so better to adapt an older body, but if you’re intrigued, there’s plenty of information out there about it. Maybe one of these days I’ll convert the old Rebel over…