Coming through the kitchen yesterday, I saw something cutting across the sprawling frontage of Walkabout Estates, and quickly grabbed the camera. 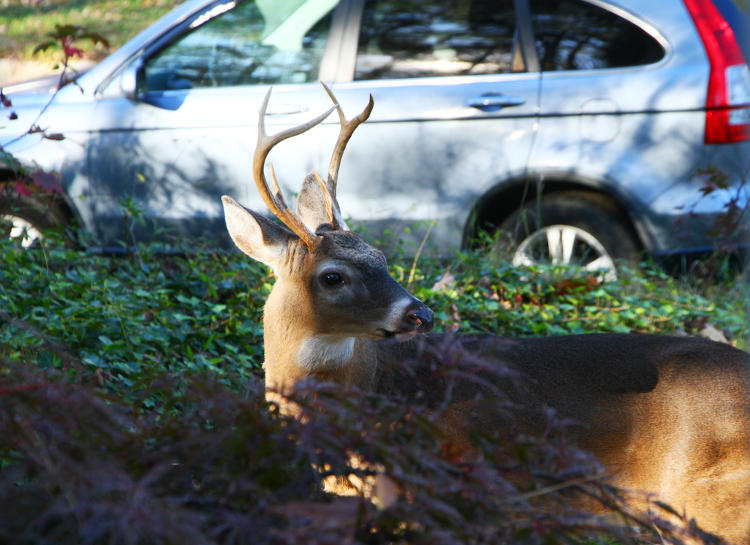 Just a white-tailed deer (Odocoileus virginianus,) a moderate-sized six-point buck, which normally don’t start becoming visible until dusk, though this was middle afternoon. I shot this through the storm door glass, where it apparently couldn’t see me because of the reflection; when I opened the storm door for a clearer view, it bolted, thankfully towards the back and not the road.

For trivia’s sake, the reddish-brown mass in the foreground is the Japanese maple that has formed the setting for so many of the images herein, and in the upper left corner of the background you can make out a branch of the oak-leaf hydrangea, which has served as well.

It’s rut season for the species, which means they’re present on the roads a lot more often, and a lot stupider – never the most astute of animals, white-tailed deer become very single-minded this time of year and often remain unaware of cars, so keep your eyes open. Know, too, that there’s rarely ever one; if you see one clear the road ahead of you, another may follow soon afterward, sometimes a whole herd. I can’t count the number of times I’ve spoken to people who saw the first but struck a follower, assuming that the coast was clear. Stay vigilant.