I did an outing yesterday! Granted, it wasn’t a terribly productive outing, and too few of the images will be keepers – including some of the ones you’ll see here. But at least there’s a smidgen of content.

I went down to Jordan Lake to see what was stirring, which wasn’t a lot – just a lone black vulture in the distance, but in the woods near the parking area, several smaller species were kicking around in a hyperactive and framing-thwarting way. Since these were mostly sparrows and finches and suchlike, songbirds which rarely hold my attention, I wasn’t paying a lot of attention to them, but to the occasional familiar calls instead. 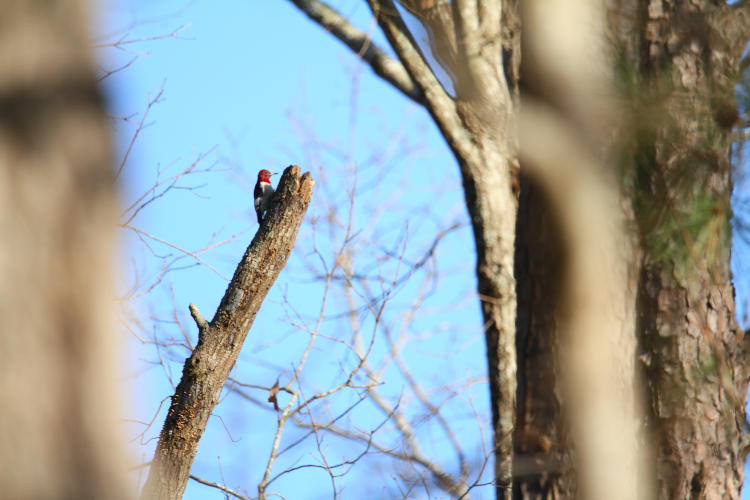 This is the entire frame from one encounter, and mind you this was at 600mm, giving some idea of the distance and conditions involved. This was the initial frame but naturally we want to be closer. 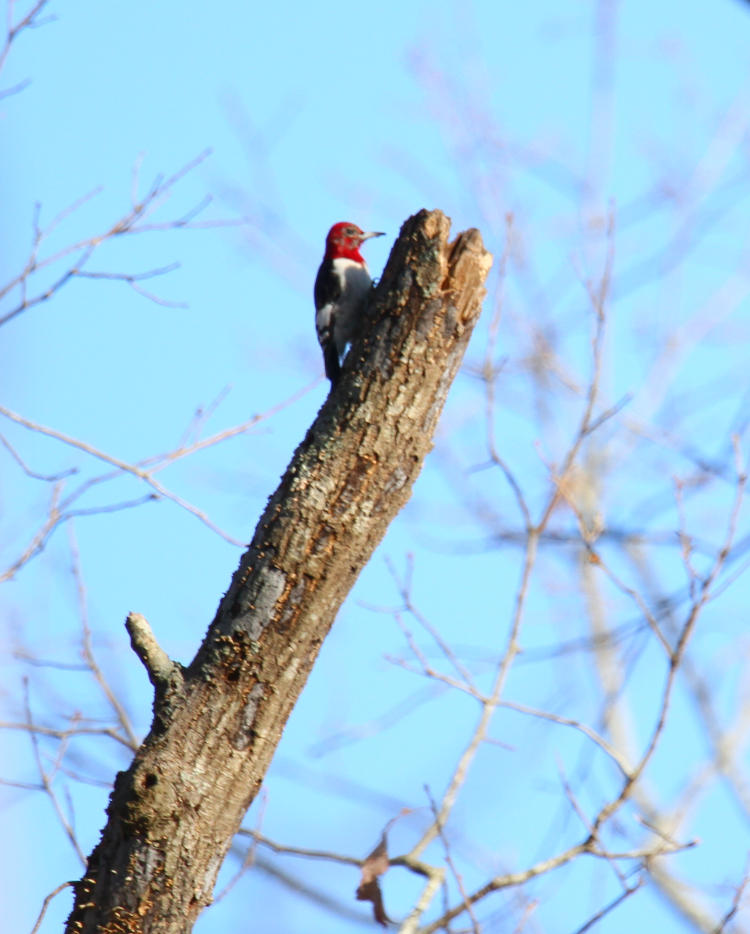 The closer crop gives us a better look and the recognition that autofocus didn’t quite lock on ideally. Still, this shows the mottled appearance of the head. This is a red-headed woodpecker (Melanerpes erythrocephalus,) the species that I was pursuing, in stills and video, numerous times last year, and this image pins it down as a yearling because the plumage is in transition between the grey heads of the juveniles and the brilliant red heads of the breeding adults. Naturally, it was too small in the viewfinder for me to know that focus wasn’t quite locked on, or even see the grey feathers on the head, but I kept shooting anyhow. 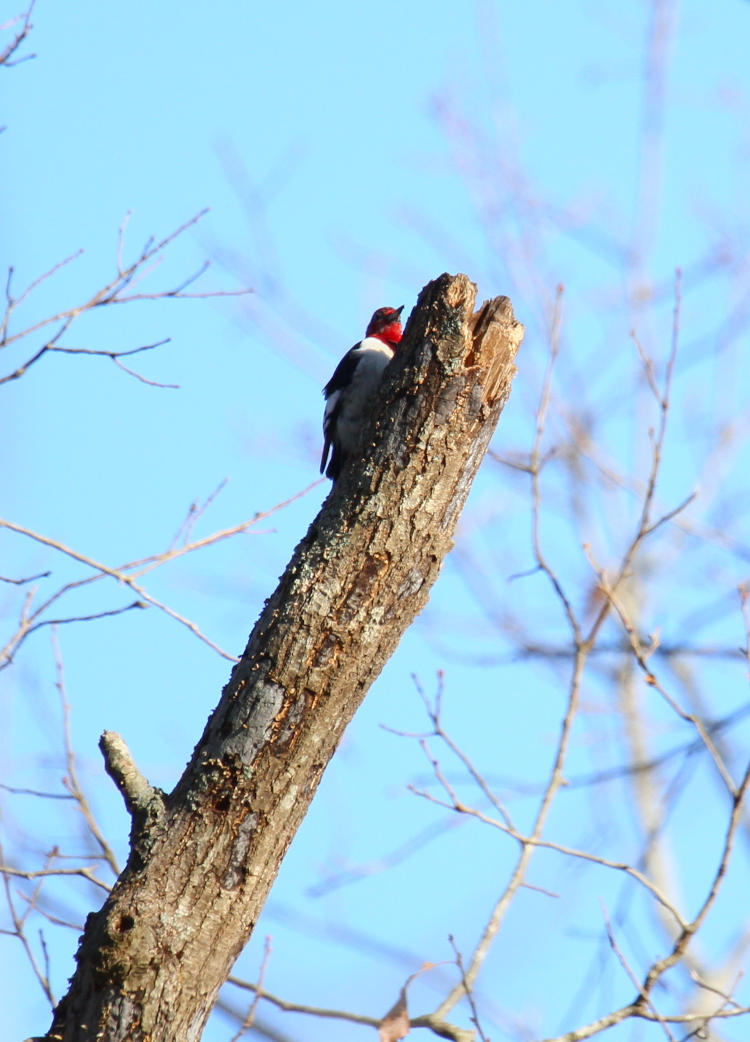 Of course, when autofocus finally did pin things down, the woodpecker stopped giving me the nice profiles and refused to show the mottled coloration clearly.

An adult, who happened to land only half that distance from me, hung around for a bit to excavate a nice cavity. 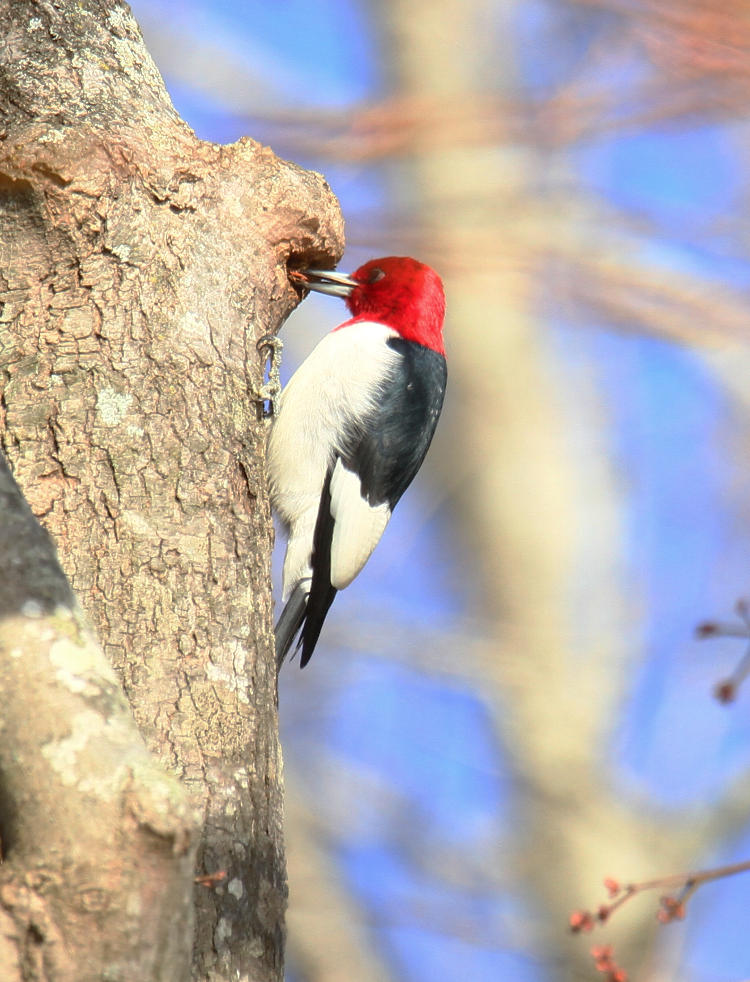 I’d like to blame the autofocus for that, but there are mitigating factors, and this caused me to pause the writing here and get a video clip to illustrate this, which not only required a bit of time in post-production, it resulted in some more images that will be along shortly. So, the clip:

The grip seen in there, by the way, can be found here.

It might seem like I have weak arms or something, and perhaps I do – I haven’t arm-wrestled anyone in a while – but I’ve been doing this for a long time now, and you need to keep in mind that every small twitch is magnified by the lens just as much as the subject. So combine this with the typical autofocus area: 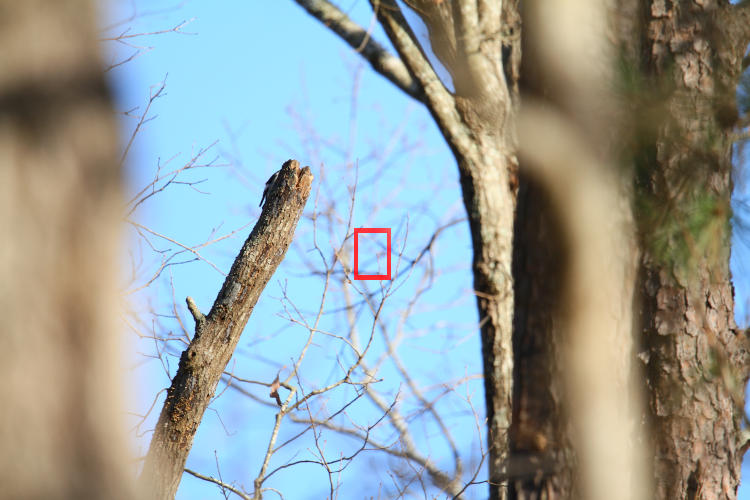 … and we see how autofocus can get confused. You thought the post title meant, “Confused as fuck?” You spend too much time on your smutphone.

Then we have foreground interference, like with this downy woodpecker (Dryobates pubescens): 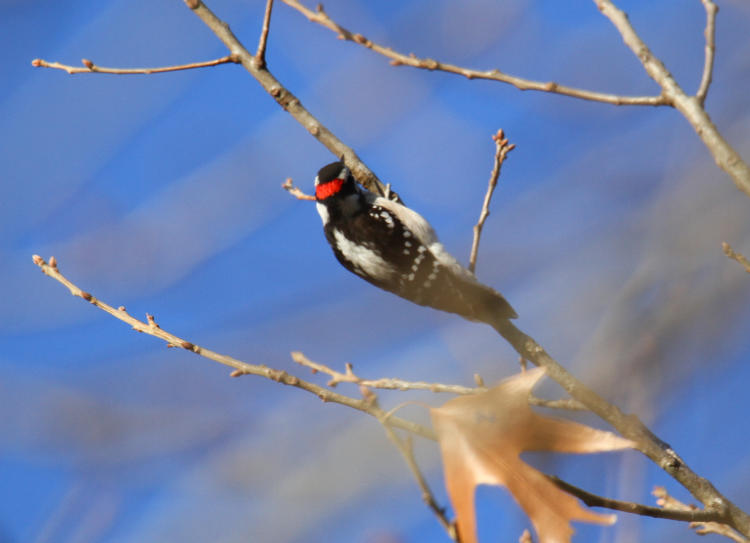 Yes, it appears to be foraging on a twig – don’t ask me what that’s about. I’m guessing it’s on its new year’s diet. 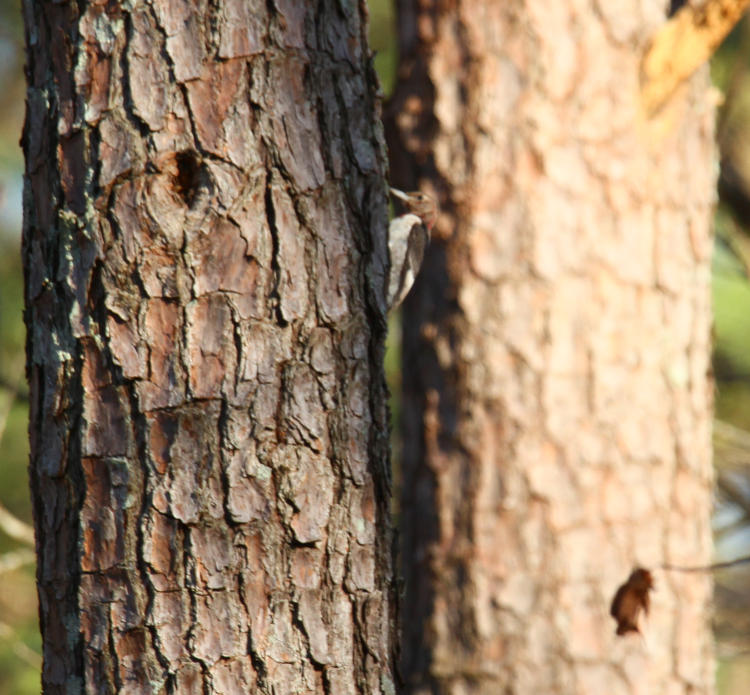 So it’s not so surprising, given these conditions, that I’m going to discard the majority of what I took yesterday.

Now to some degree a tripod, or at the very least a monopod, would help tremendously with stability and thus the ability for autofocus to ‘know’ what I was trying to focus upon, and I recommend using one as often as possible (and with very few exceptions, video should never be done without a tripod.) But then we have the factors of a) lugging it around to new positions every time the subject moves to a different spot, which with woodpeckers happens every thirty seconds or so; b) having one that can hold the lens well above eye level for higher subjects; and c) every time you lock the head down, the subject will move to a new position, because nature photography subjects enjoy being perverse. You miss more shots trying to maintain good habits than if you ‘wing it’ by shooting handheld. I was able to use a tripod so often last year because my focus was on the nest itself, and thus fixed. Image stabilization helps a lot, but there’s only so much it can do, and it can’t compensate for the kind of wobbling seen in the video. 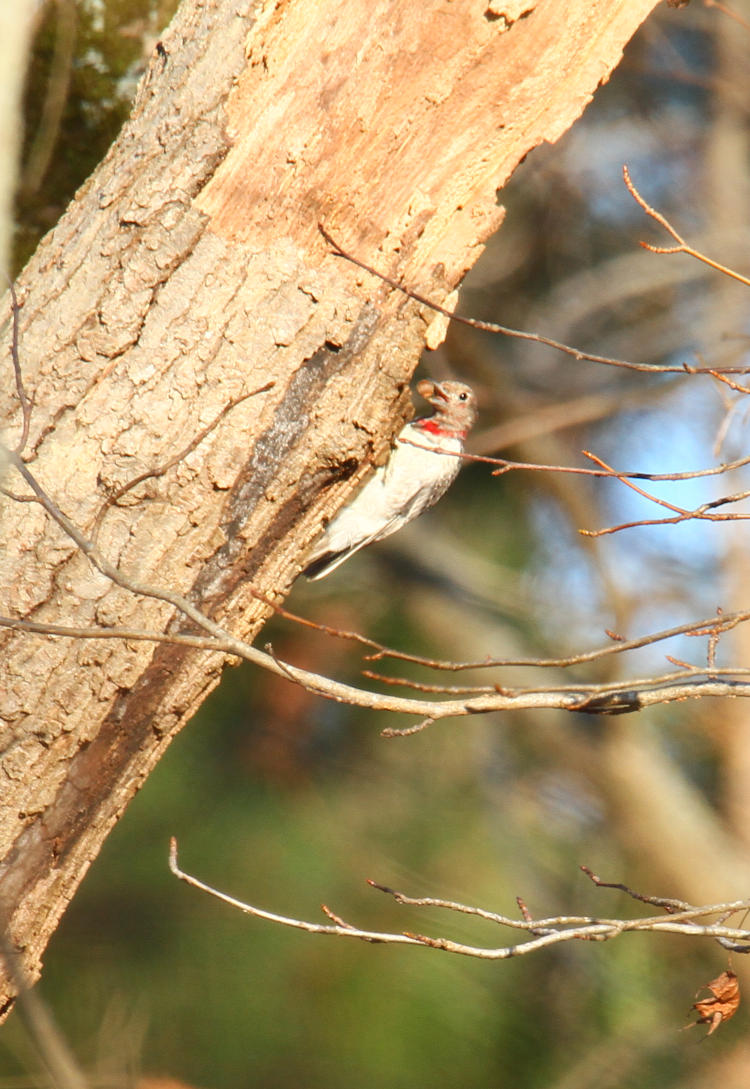 This one, also a yearling (and showing off its acorn,) doesn’t seem to be as far along in the transition, which may indicate a brood from later in the year; I caught fledglings leaving the nest in June and August. Is this – are any of these – woodpeckers that I photographed previously? I have no way of knowing. Given the proximity to the nest area, a few hundred meters away from this (and quiescent at the moment – I checked,) it’s entirely possible, but the species is abundant in the region and that was likely not the only nest to be found, so the chances are still slim. But maybe.

* Big-bodied woodpecker – why, what did you think I meant?

« No hesitation [previous]
[next] Okay, that works »