To the best of my knowledge (and searches through old negatives,) this is my first successful lightning capture, dating back from 1996 I believe. Moreover, it was captured in a non-standard way, because the storm rolled through at dusk and the sky wasn’t fully dark, so a long exposure was out of the question. Thus, as the wicked activity rolled around me, I held my Olympus OM-10 and 50mm lens in hand, aimed at the active portion of the sky, and waited with my finger on the shutter release for a bolt. My friend, witnessing this, was openly skeptical, arguing (correctly) that most bolts didn’t last more than a fraction of a second and my reflexes simply wouldn’t be adequate. I agreed, but was hoping for one of those flickering bolts that hang around long enough – and actually caught one! It doesn’t compare to many images out there, and I always had something much better as a goal even then, but the nature of available electrical storms and the opportunity to exploit them meant that even the bare attempts tended to be spaced out by years. 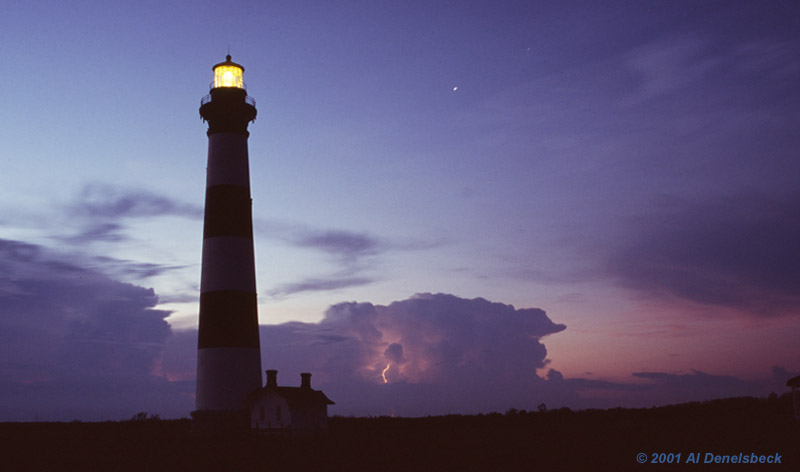 Five years later on, this time with significantly better Canon equipment and slide film, I got lucky early one morning during a beach trip and had a distant storm passing behind Bodie Island lighthouse. I was quite enthusiastic about this at the time, and for a few years afterward as well, but now I consider it rather lackluster – that’s what progress will do to you, which is a good thing, really. Always raise those standards.

I had to include this animated sequence, fifteen years further on at the same lighthouse, but this time facing almost exactly in the opposite direction (and shooting digital now.) A couple of frames were notably better than the above, but the collection of them showing the boiling thunderhead (entirely lit by its own lightning) is fascinating to me. This was kind of a gamble that paid off, given that I saw the developing cell at sunset and wondered if it would pan out, requiring a drive of 58 kilometers to be in position by the lighthouse. But given that I stayed just one night out there on this trip, luck played the largest part. I remember watching the first flashes of lightning as I was driving north, hoping the storm would develop more strongly and not peter out before I arrived. I also recall that I left so quickly I forgot my headlamp, making the small hike out across the open lawn in the dark a little hazardous, given that cottonmouths might have been in the vicinity, and getting bitten to shit by the mosquitoes that breed in the marshlands surrounding the lighthouse. It was also right before The Girlfriend went to bed (I was doing this trip alone,) so I had to call her while standing out there behind the tripod watching the light show. Given all that, it was a fun evening, and worth it.

But let’s get to some local efforts. I don’t really have a favorite lightning image, but this one is probably the most fartistic, and has been produced as a print. It’s a crop of a wider image showing the bolt and its reflection, though I thought the reflection by itself worked pretty well with the ripples from the raindrops in there. The biggest change was moving to a new location with a pond nearby, and thus having immediate access to an open, scenic area facing west when the storms approached; our previous house was abysmal in that regard, and getting someplace appropriate usually took too long and the storm had moved onward by then.

And then, naturally, there’s this one: Only a couple kilometers from the house, I was being stupid and watching a storm develop almost directly overhead while standing out in the complete open – don’t do this! Initially, I’d been watching one much more distant, but that petered out while the clouds overhead started a little cloud-to-cloud activity, and I simply didn’t register that this was far too close. The ground strike, the only one from that activity, was within a few hundred meters of my position, reminding me to get my ass out of harm’s way. But this means that you’re looking up the length of the bolt in this image. It’s very dynamic, but… really, there’s nothing else in the frame, is there? I dunno, maybe I’ve seen it too much now…

Being in position for the storm that died out came courtesy of a real-time lightning tracker, allowing a bit of forewarning as well as trends that revealed the direction of the storms, which greatly increases the chances of getting decent lightning images. Since that time, plenty of apps have been developed for smutphones, so warnings can be received even when away from a proper computer. Once again at the neighborhood pond, only on the opposite side now, this one is perhaps the most dynamic given the shape of the bolt, the layers of clouds and lighting thereof, and the overall mood. There’s enough of a setting to make it a scene rather than just a bolt, but little enough that imagination fills in the gaps – it can be anywhere you want it to be, suggestive rather than specific. This needs to be a print too, I think…