This one was inspired when I was going through the folders and realized I had a counterpart that was just done recently (like, since the last Visibly Different post.) We start back in October 2009. 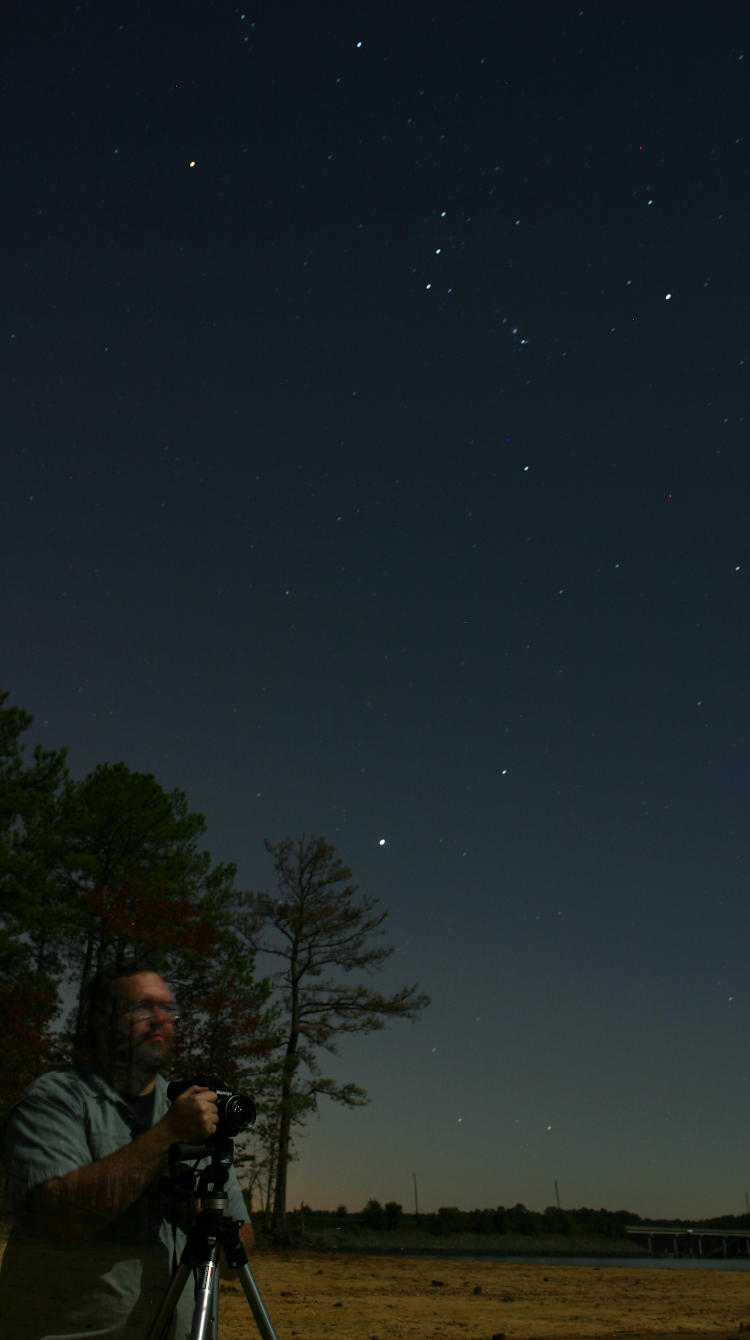 Part of the reasoning behind this was wanting a portrait of myself to use for promotional purposes, only not serious ones – I’m never going to be a realtor so I don’t need the ‘warm smile in some studio’ headshot, plus I scare people. This one was a self-portrait that didn’t quite work, so I eventually settled on the one seen here, which probably should be updated.

But it was also a moonlight experiment, and a ‘ghost image’ one, since I was purposefully present for only part of the exposure, while the camera (the one in the frame – well, both, actually) was present the entire time – the idea was that the camera had a ‘real’ presence while mine was incidental. Hah! Such fartistic commentary! Which would have worked much better against the open sky than the trees, which is largely why it wasn’t ever used. Except for the obvious reason that I scare people.

By the way, despite the various shortcomings, this is a self-portrait, and not a fucking ‘selfie’ – selfies are vain and inept things done with a smutphone and an absence of cognition. Know the difference.

Now we come to this past Saturday morning. 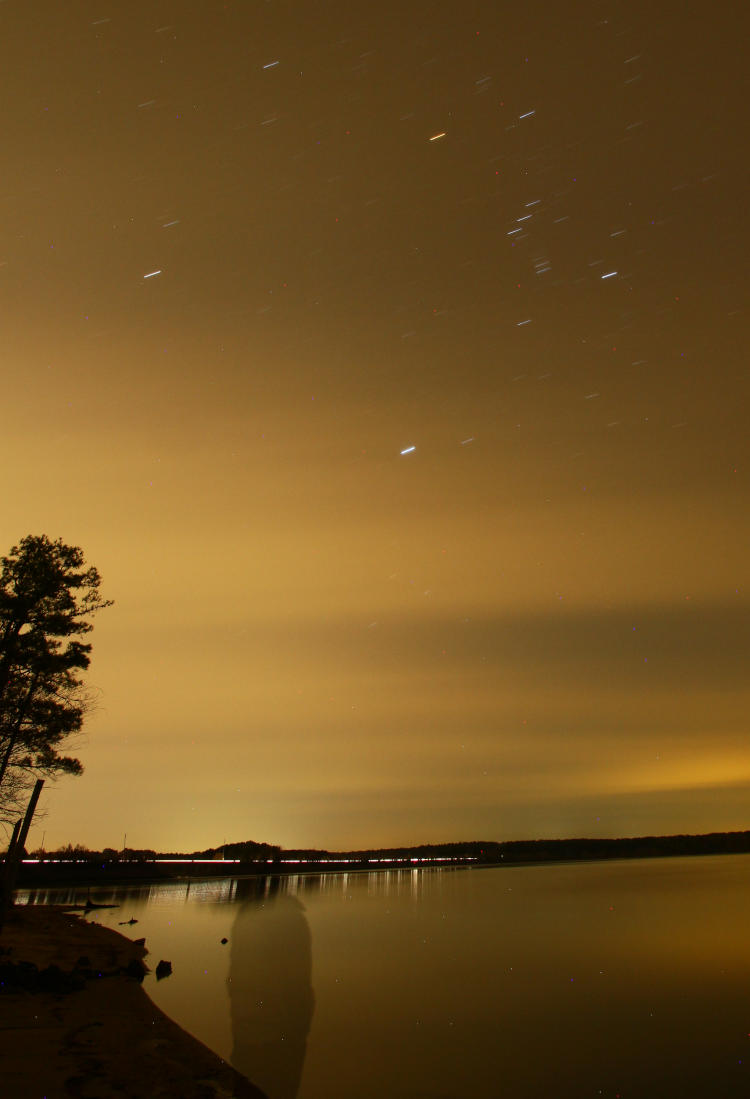 I just cropped this tighter from the version posted a few days back, to emphasize the similarities a little, because this is the exact same spot, and I’m pretty sure those are the exact same stars up there – I mean, they’d gotten out of my sight between the two frames, so I can’t rule out substitutions, but…

Unless you were really checking the background details, though, you might never realize that they were the same location (much less the same person.) The primary clue is the orientation of Orion at the lakeshore, pinning down the view direction and suggesting a closer look, but the lake is so different between the two, especially the water level, that it’s easy to slip past. The base color register throws things off, as does the focal length which shifts relative positions within the frame. The exposure time of course – the first pic was 25 seconds while the second was 303. Though it looks like that outermost tree has died in the intervening years, I think that’s actually a piling you see in the latter pic since it was shot at a slightly different angle. It’s clearly not intended to let us see the figure now, so the underlying ‘mood,’ for want of a better word, has changed. And there’s the suggestion that the temperatures were significantly different, because despite what little you can tell from the shadowy figure in the latest pic, it’s obviously not in short sleeves…

Woo hoo, exciting, right boys and girls? Yeah, c’mon, it’s effectively winter here, except not the kind with snow (yet.) We’ve entered the slow season and the pics will reflect this. Hey, think how I feel…

A note about exposures like this: If you want to try them, the primary thing to keep in mind is relative light – it’s not the amount of time that something is within the frame that dictates its ‘strength,’ but how much light it reflects. In the top frame, even though the camera is there throughout the exposure while I’m not, the camera only reflects highlights from its black surface, which were still much dimmer than the light reflecting from my hand, so I should have been in the frame much less time. The dark background didn’t help at all, and it should have been against clearer sky (I was purposefully keeping Orion in the frame, so this had an impact, plus the fact that I wasn’t in the frame while framing it.) The brightness of the clothing makes a difference. The best thing is to shoot a bunch of frames with varying percentages of your ‘ghost’ within the frame – 20% of the total exposure time, then 40%, and so on (I think the bottom frame was 40%, but this was also a brighter background.) Holding still is paramount of course, and the closer the portrait the worse this will become. It may take a while (like multiple sessions) before you get the effect you were after. Or you may snag it in one frame.

« Make-believe [previous]
[next] Not perfectly clear »