So not only did I get out to view the ‘peak’ of the Leonids meteor shower on Thursday night/Friday morning, I returned on Friday night/Saturday morning for the predicted surge. Though you wouldn’t know it in the slightest – yeah, it was that bad. The first night was notably cold, dropping below freezing, which I realize doesn’t hold a candle to some northern weather but it’s still miserable standing almost motionless on the edge of a lake for over an hour, and my sinuses were protesting painfully. I had two cameras with me, as suggested in an earlier post, but the second one used older batteries, nor was it fully charged, and as a result it pegged out after twenty minutes. I warmed the batteries in my hands in my pockets for about ten minutes and got another exposure out of them, but that was it. Waste of time anyway. 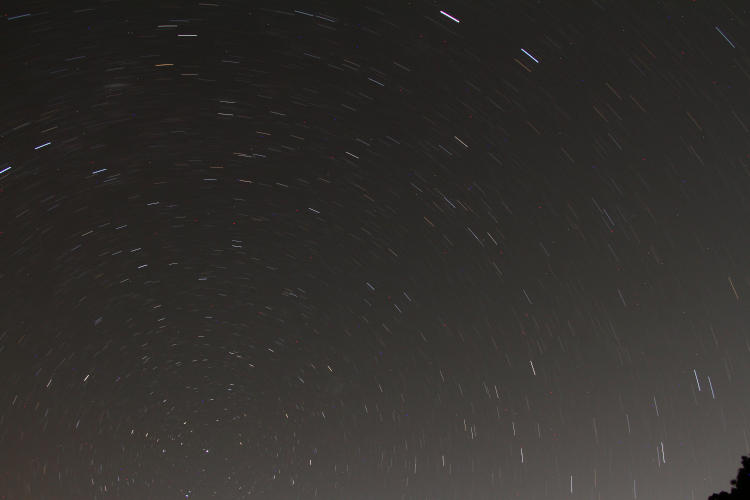 This was ten minutes at f8, ISO 400, looking mostly north as you can see – semi-dark in that direction, but near the one meteor that I saw for both nights – just, not while either camera was aimed that way. I couldn’t even find evidence of a satellite. This was the first night, by the way, and I took a moment and boosted ISO for a detail image without (noticeable) star trails: 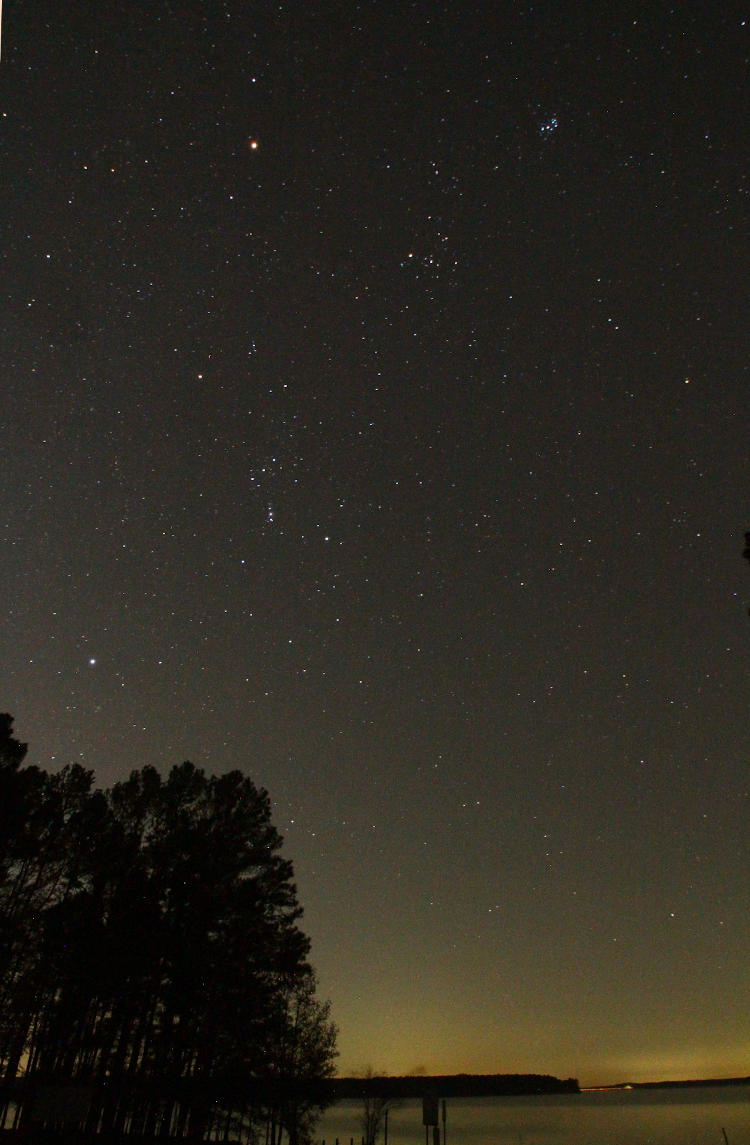 This is with the ultra-wide at 11mm (thus the leaning trees from fisheye distortion,) 30 seconds at f8 and ISO 6400, and shows Orion slightly left of center, Taurus above and to the right of that, with the Pleiades cluster further in that direction. The bright star at lower left is Sirius, while the brightest star isn’t; that’s Mars, between the horns of Taurus. Clicking on the photo will provide a larger version for more detail (and more noise, but whatcha gonna do?) Technically, Uranus is in this photo too, right on top of another star that’s dimmer, so at least one of those little dots is mostly light from Uranus – I’ll let you find it with Stellarium if you like. It was a distinctly clear night, and except for the cold it was ideal for watching a meteor shower – shame one didn’t show up. I would have braved the cold longer had I seen more than one brief, tiny little meteor, but it was clear that the show wasn’t going to be engaging.

I returned the next night because ‘they’ predicted a possible surge about 1 AM, and I was dedicated enough to be ready for it. But the humidity had rolled in heavily, obscuring all but the brightest stars, and I knew the bounceback from light pollution would make exposures much worse. 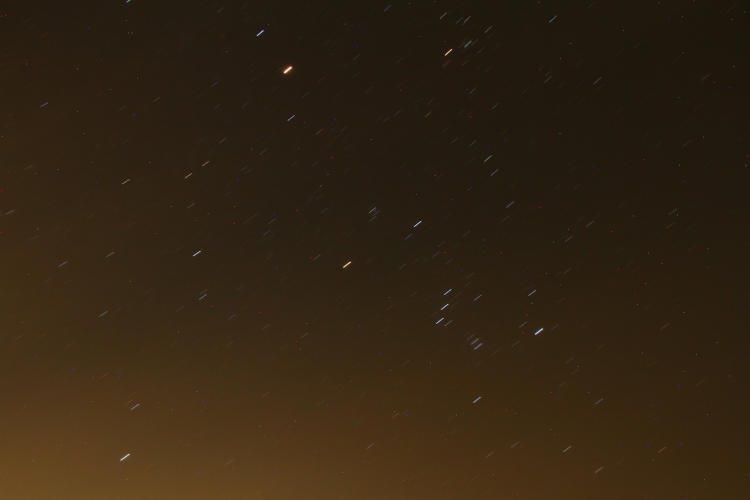 That’s Orion again near center, Mars near the top of the frame – only 200 seconds this time at f8, ISO 400 and you can already see too much sky glow. This was the clearest portion of the sky, too – to the west, brilliant Jupiter was barely visible through the heavier clouds, so nothing else could be seen, and all but the brightest fireball would have been obscured. I made a few attempts and waited to see if the sky might clear, but if anything it was getting worse and absolutely nothing made an appearance.

I tweaked one of the exposures just for the sake of it, though: 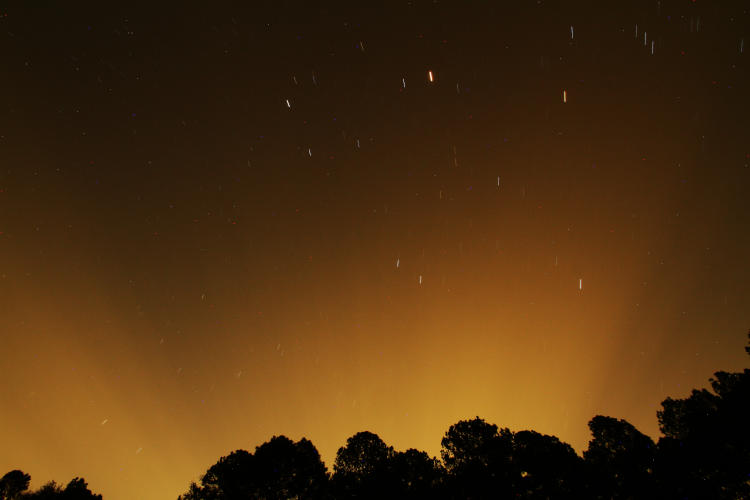 All I did was boost contrast a little to enhance the effect – the crepuscular rays really were like this. This isn’t from the sun or the moon, but from the city of Durham, a 300-second exposure, and I couldn’t tell you what caused the shadows in the light pollution, but combined with the star trails it almost takes on the appearance of a blast. I’m guessing from this that the humidity layer was quite low, but that’s only a guess. By the way, I just spent too long trying to determine which stars are actually visible here, but can’t pin them down, even though I knew which way I was aimed.

One last, for giggles: 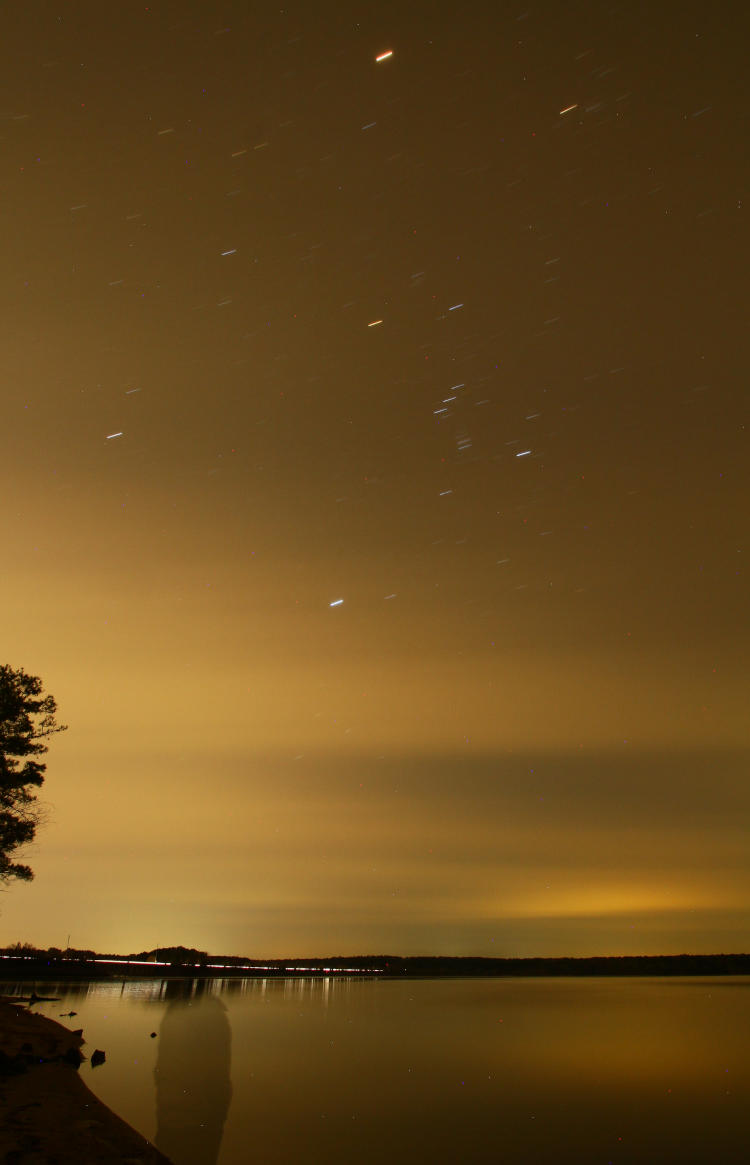 Yes, that’s Orion and Mars again – and me, holding still in the frame for two minutes out of the five that the exposure took. You can see how bad the horizon was getting. I was alone out there, so I had no idea how it was framed, and it wasn’t worth further playing around – shame that two cars passed after I’d left the frame, otherwise there’d be a nice gap in their lights and reflections. Maybe next time.

But yeah – typical luck with a meteor shower. This is getting tedious.

« Those ugly signs [previous]
[next] Make-believe »