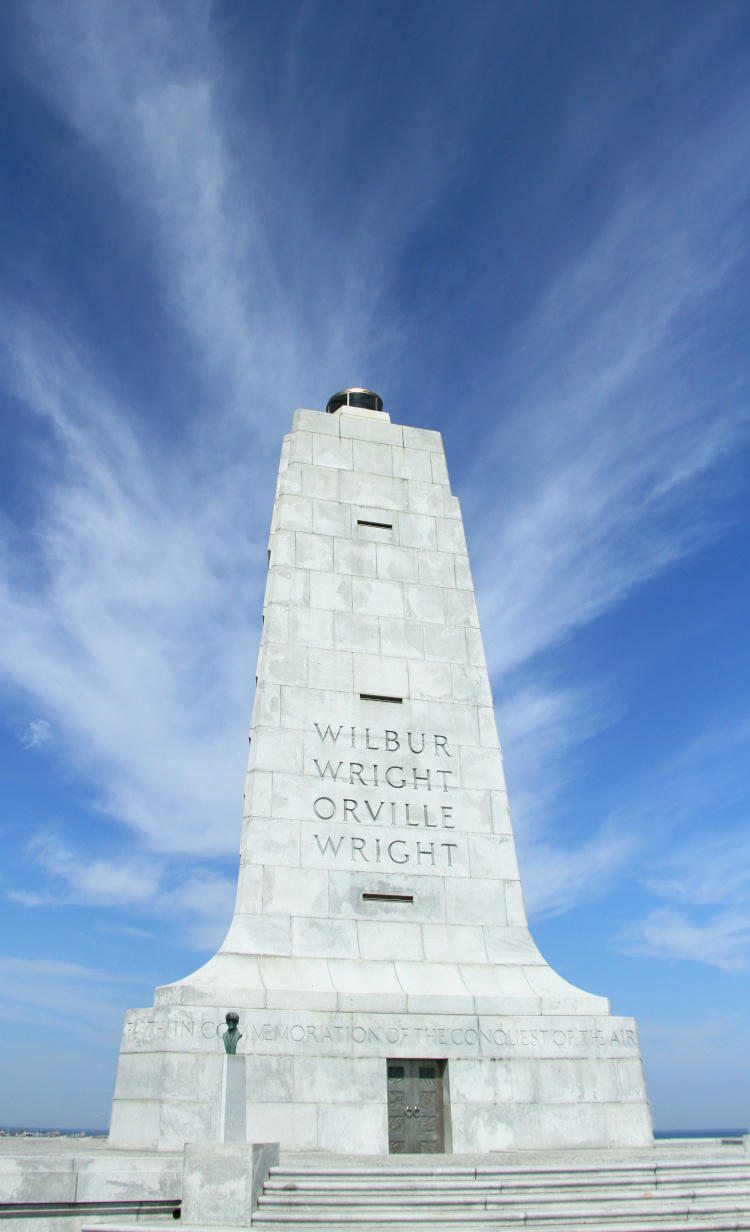 I think this will be the tail-end of the beach trip pics, as well as the last for the year – never really got a ‘proper’ trip in, with one thing or another, but at least my brother finally got down here to see the Outer Banks for himself, as brief as it was. We grew up with Jersey beaches, which are in an entirely different universe (a more crowded and overdeveloped one,) though he’s had exposure to some Florida spots. As the image indicates, we did hit the Wright Brothers National Memorial, and while I have plenty of images from previous trips there, the clouds were cooperating this day so I shot a few frames (including some goofy ones that you’re not getting to see.) And I only had to dub out two other visitors from this one. 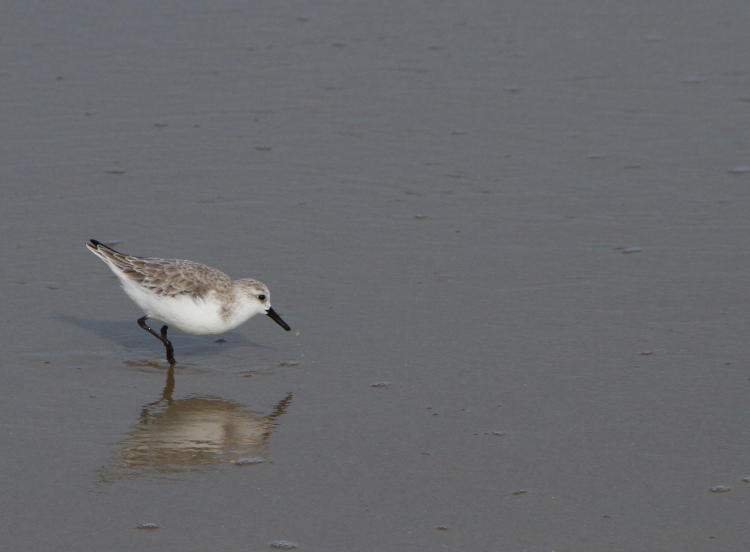 As mentioned earlier, the beaches themselves were nearly empty, of both people (which was great) and wildlife (not so much.) I did a few fartsy shots, enough to register “beach,” but not a lot else. This is a sanderling (Calidris alba,) the most common sandpiper in the area, probably venturing off on its own to pass gas. But this is misleading, because not far off was a small flock, and I caught them as they took flight in a reasonably dynamic shot, though it could be better. 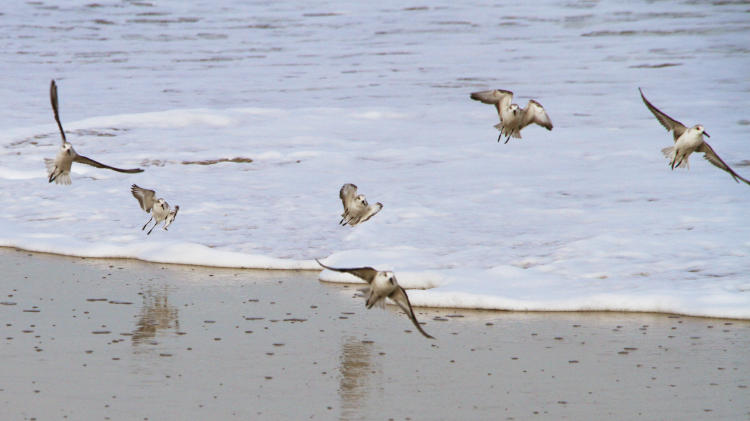 This is cropped from a wider frame, and I did another ‘panoramic’ version that may eventually get up into that banner slideshow at top. They’re small birds and thus take flight so quickly that the opportunity for cool ‘launch’ photos passes in milliseconds – I was lucky they faced more-or-less towards me as I fired off the frames.

There was a mix of gulls as well: the laughing gulls that you’ve already seen, a few that I wasn’t exactly sure about (given the change in plumage that several species go through at this time of year,) and a few really distinctive ones, both in coloration and size. 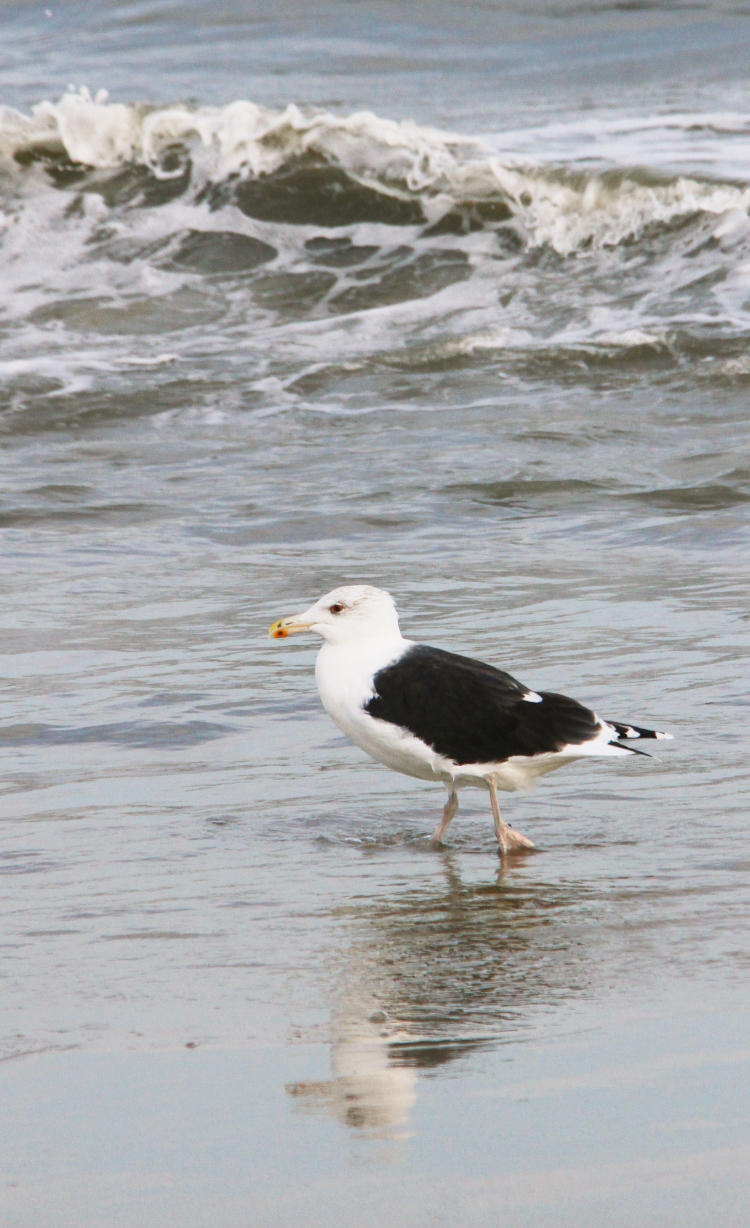 The dark wings and back, the pink legs, and the size all paint this as a great black-backed gull, nearly twice the size of the laughing gulls and five or six times the size of the sanderlings. I’ve only ever seen them a few at a time, at the most, hanging out with other gulls as if they’re chaperoning, and this is possibly the closest approach that I’ve captured (and I wasn’t even using the long lens.)

The beach we chose wasn’t even decent for shelling, much less finding coral or shark’s teeth, so I did a couple quick farsty shots with what there was to find. 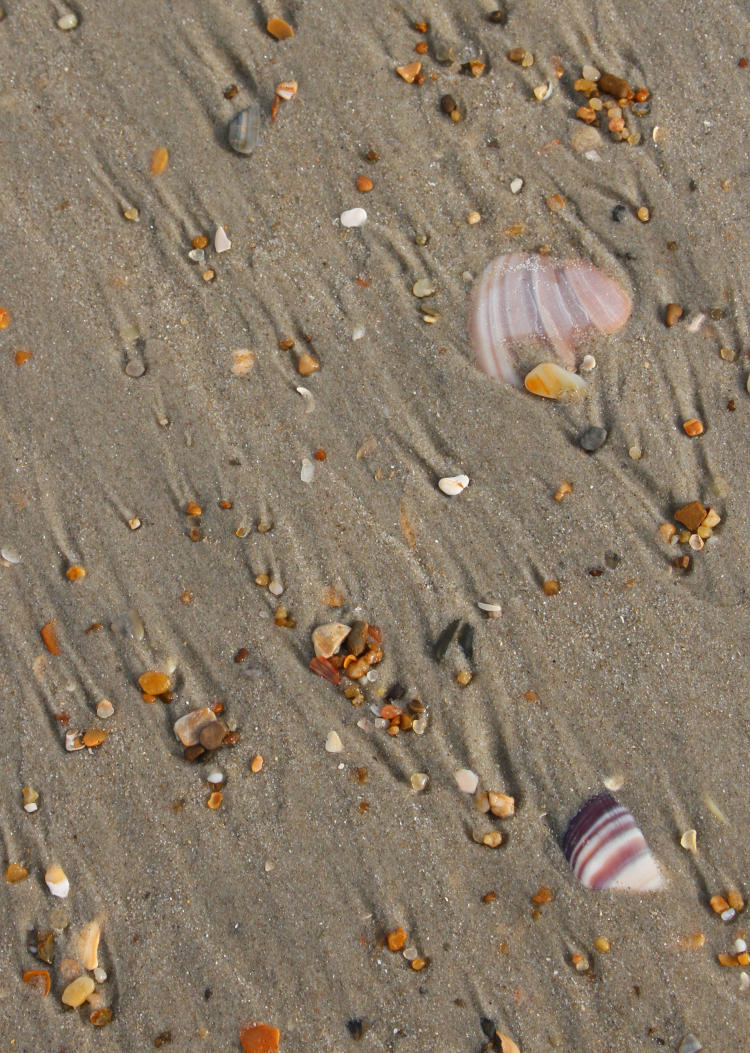 Don’t try telling me you see the edge of a doubloon or something in there – I’ve already checked. The sparse amount of wildlife activity put it slightly above Oak Island, but not enough to warrant return visits.

I did mention that we didn’t get up for sunrise, nor did we make the attempt to do any starfield exposures – we were up in Manteo by that time and not about to trek down 30 kilometers or more for the truly dark skies. I have to admit that I was completely surprised by the new bridge into Rodanthe, since I hadn’t seen even a hint of it the last time I was through that area, but I understand it completely; the area north of Rodanthe is notorious for washouts during storms and maintaining the roads, at times, required significant effort and cost – it’s the only direct route to the mainland. The entire region sits only a little above sea level and Rt 12 is often only a few hundred meters from the water’s edge, so storms can overcome the dunes and submerge, bury, or even disintegrate the asphalt – we were there three weeks after former-Hurricane Ian, which was far from a direct hit on the Outer Banks, and there remained a spot where seawater was still on the road. When the NOAA or weather service says, “evacuate,” don’t argue.

On the way out, we did two little stops, one of which we never expected to be photogenic and thus we left the cameras in the car, but were a little more prepared for the second, which I usually stop at – that would be Creef’s Cut in the Alligator River National Wildlife Refuge. That produced the Amanita (maybe) mushroom from the previous post, and another not-so-little find: 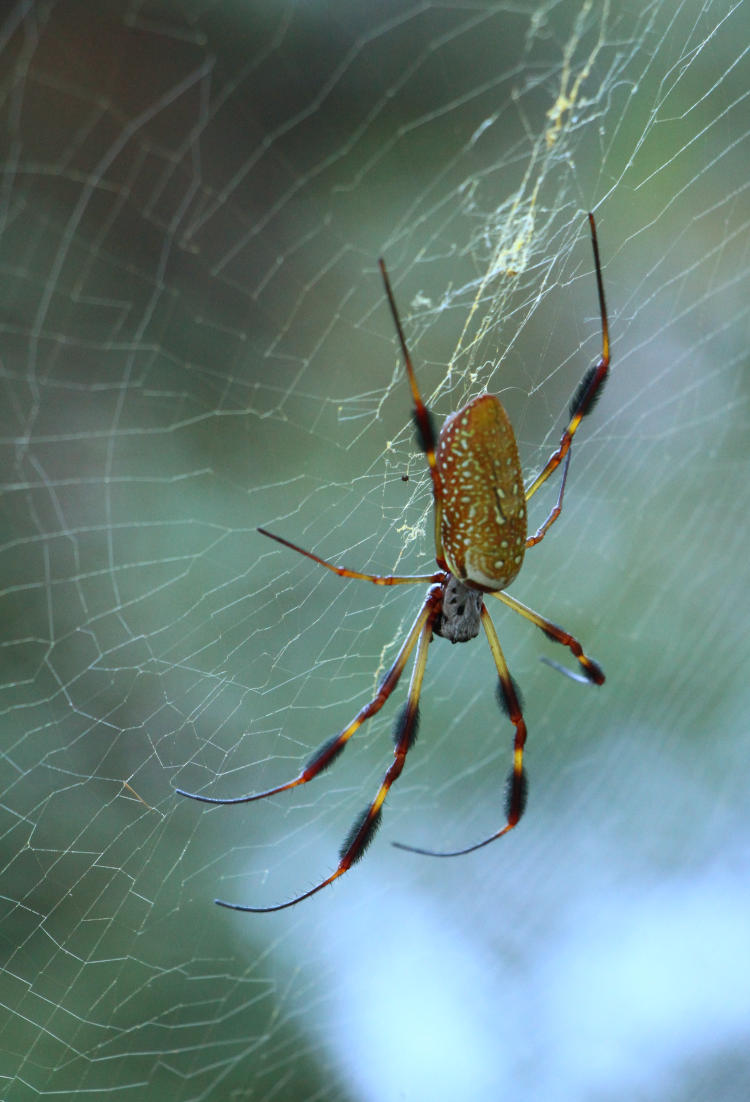 This is a golden silk orbweaver (Trichonephila clavipes, formerly Nephila clavipes,) and this is one of the few images I’ve obtained of them that shows the color of the silk. While I can get inordinately close to spiders for detail shots, this wasn’t as required for this species, because it’s huge – the colloquial term is ‘banana spider,’ both for the coloration and the size; the body length can get as long as your little finger, which makes the leg spread as large as your palm and the web itself over two meters at times. This one wasn’t quite that big, but it was also at eye level and not far off the path; I’ve rarely encountered them so easy to reach, usually finding them either well overhead or out in marshy areas with lousy footing. In fact, I think the last time I was able to get so close, it was one that my brother had found when he visited me in Florida nearly twenty years ago, suspended right at chest level where he almost walked straight into it; the exuberant cursing (he’s even more accomplished at this than I am) brought me over from a nearby trail. That one was nowhere near as big as this one, who was kind enough to be well off the trail.

By the way, if you went to that link under the species name (and why not?) you might have noticed the sizes: females up to 50mm, males up to 8mm. That’s like your little fingernail. Make all the comments you want…